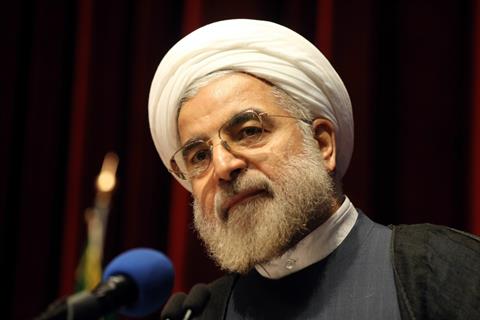 AFP – The United States and other world powers voiced hope for better engagement with Iran after moderate cleric Hassan Rowhani was declared its new president, but Israel called on the international community to keep up the pressure over Tehran’s nuclear drive.

Rowhani’s election ends eight years of conservative grip on the presidency, and he used his first statement after his win was confirmed to announce a “new opportunity” for the West to treat Iran with respect and to recognize its rights.

The White House criticized irregularities in the vote but said it was prepared to engage in direct talks aimed at reaching a “diplomatic solution that will fully address the international community’s concerns about Iran’s nuclear program.”

Russia, which has enjoyed better ties with Tehran, also said it was looking forward to enhanced cooperation with the new administration.

President Vladimir Putin “confirmed his readiness to advance the development of mutually-beneficial cooperation with Iran in various fields, in the interests of regional security and international stability,” a Kremlin statement said.

The West suspects Iran is seeking to build nuclear weapons, but Iran insists its atomic program is for peaceful purposes including generating energy.

Israel, which is the region’s sole if undeclared nuclear power and has not ruled out a military strike against Tehran, saw little chance of a radical change in Iran’s nuclear policy and urged the West to apply continued pressure.

Intelligence Minister Yuval Steinitz said the nuclear issue had been handled directly by Iran’s supreme leader Ayatollah Ali Khamenei, and noted that Rowhani had been one of his close aides.

“Therefore without continued pressure on Iran there is no chance of seeing significant change in nuclear policy,” Steinitz said Sunday.

Rowhani has previously vowed to restore diplomatic ties with the United States, which cut relations in the aftermath of the 1979 seizure of the US embassy by Islamist students.

UN chief Ban Ki-moon urged Iran to play a “constructive role” in regional and international affairs, his office said in a message congratulating Rowhani and welcoming the reported high turnout.

Ban “intends to remain engaged with the Iranian authorities and with the president-elect on issues of importance to the international community and the welfare of the Iranian people,” his office said.

EU foreign policy chief Catherine Ashton said she was committed to working with Rowhani to find a “swift diplomatic solution” on finding a solution to the disputed nuclear program.

French Foreign Minister Laurent Fabius said Paris was “ready to work” with Rowhani, and said the nuclear program and its involvement in the Syrian conflict would be high on the agenda.

Britain urged Rowhani to set the Islamic republic “on a different course,” while German Foreign Minister Guido Westerwelle welcomed Rowhani’s election as a vote for reforms and “a constructive foreign policy.”

And with the conflict in Syria fanning sectarian tensions in the region, the mainly Sunni monarchies in the Gulf gave a guarded welcome to the new leader of Shiite-dominated Iran.

At home, the supreme leader hailed Rowhani on his first round victory.

“Congratulations to the people and to president-elect Hojatoleslam Hassan Rowhani,” Khamenei’s website reported.

“I urge everyone to help the president-elect and his colleagues in the government, as he is the president of the whole nation.”