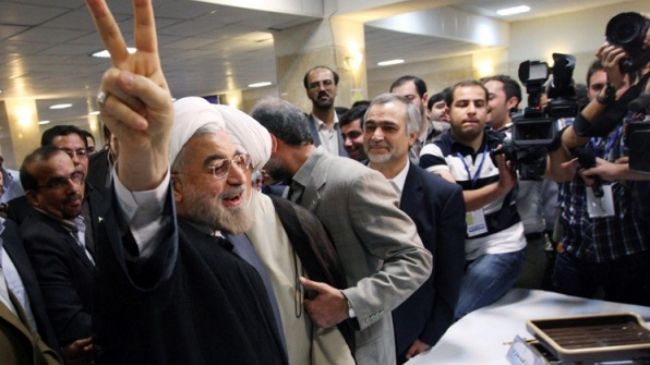 Iran’s President-elect Hassan Rohani after casting his vote on June 14, 2013

“Italy trusts that, with the new government of Iranian President (Hassan) Rowhani, it will be possible to work at developing bilateral relations and begin, without delay, a season of renewed comprehension and constructive dialogue between Iran and the international community,” Bonino said in a statement on Saturday.

Bonino said she noted “with pleasure the proper carrying out of the presidential election in Iran.”

“We hope that the country’s new administration collaborates in this sense in order to reach solutions on international and regional questions,” Westerwelle added.

Earlier, officials from other countries had also congratulated Rohani on his victory in the June 14 election.

Iranian Interior Minister Mostafa Mohammad-Najjar announced on Saturday that of a total of 36,704,156 ballots counted, Rohani has won 50.70 percent, a decisive 18,613,329 votes.

Nearly 50.5 million Iranians, including more than 1.6 million first-time voters, were eligible to participate in the June 14 elections. The Interior Ministry put the voter turnout at 72.7 percent.