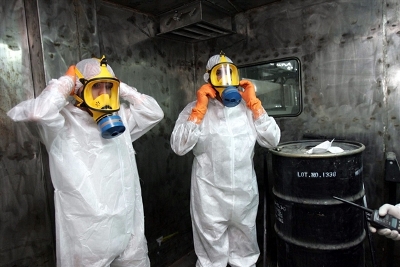 Acting defense minister worries West might be ‘tempted’ to approve ‘more talks, while centrifuges spin’; Foreign Ministry: Iran will be judged by its actions

Israel’s acting defense minister said Saturday he was concerned Hassan Rowhani’s win in the Iranian presidential elections might buy Iran more time in diplomatic contacts with the West over its nuclear program.

Gilad Erdan (Likud), who is filling in for Moshe Ya’alon, said he feared Rowhani’s win, and his reputation as a centrist and reformer, might lead the West to give Iran more leeway in diplomatic contacts over its rogue nuclear drive.

“There might be a temptation… to agree to another round of talks, and then another round. Meanwhile the centrifuges are still spinning,” said Erdan, who is also minister of Homefront Defense and Communications.

He told Channel 10 he was worried world powers might misconstrue Rowhani, because he is a cleric, as some kind of benevolent “spiritual” leader, who might change policies, when this was certainly not the case.

The Foreign Ministry spokesman’s office issued a statement on the news from Iran expressing a similar sentiment.

“The president elect in Iran had been shortlisted by Ayatollah Khamenei, who has disqualified and removed candidates who did not conform to his extremist views. Iran’s nuclear program has so far been determined by Khamenei, and not by Iran’s president.

“After the elections, Iran will continue to be judged by its actions, in the nuclear sphere as well as on the issue of terror. Iran must abide by the demands of the international community to stop its nuclear program and cease the dissemination of terror throughout the world,” read the statement.

“The Iranian nuclear program will continue. We are not expecting any dramatic changes on that front. There will also be no change vis-a-vis Hezbollah and support [for the terror group] will continue,” said Mofaz.

At talks in Washington on Friday with his US counterpart Chuck Hagel,Defense Minister Ya’alon had said the Iranian election would “make no difference,” because its results would be determined by Supreme Leader Ayatollah Ali Khamenei.

“Khamenei will be the one to determine the identity of the next president. We have to be tougher with Iran on the diplomatic front,” Ya’alon said, calling for stricter sanctions. “It must be clear to them that the military option is on the table,” he said.

However, Iran expert Professor David Menashri from Tel Aviv University said Saturday the Rowhani victory was nothing short of an “earthquake.”

“This is a very significant development. Iran was not only wary of a repeat of what happened in 2009, but also of what has been happening in the Middle East since the Arab Spring began in 2011. The regime was not interested in a second round but surely it is surprised by the outcome. A week ago, no one would have expected it,” said Menashri during a Channel 2 discussion on the Iranian presidential election.

Although Rowhani is a cleric, “this is not about religion, this is about a ‘new way’ for Iran,” Menashri added.