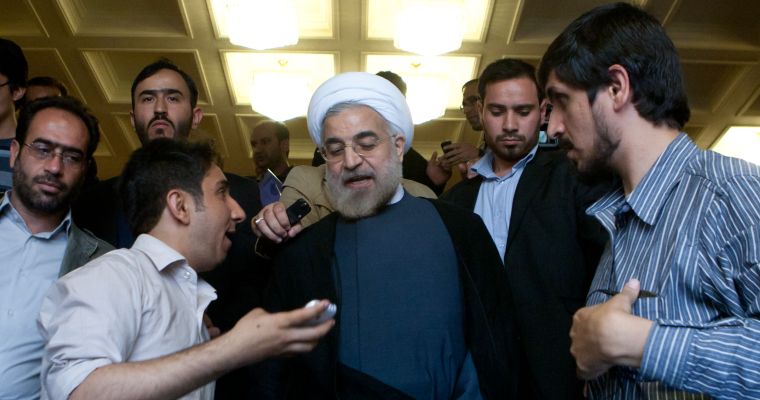 Three pivotal questions for Rowhani in the Iranian election

Partial election results seem to indicate that the moderate cleric Hassan Rowhani will take the presidency. But even if he does, will he be disqualified at some stage for harming the regime?

As the results of the Iranian election become clear, it seems that Hassan Rowhani is likely to win a majority of the vote. However, the three decisive questions will be: Will Rowhani clear the 50 percent mark that ensure a first-round victory? Will a large number of fraudulent votes be disqualified from the ballot boxes? And, will Rowhani himself be disqualified at some stage for harming the regime?

The criticism that Rowhani has levied against on the regime for oppression and suppressing freedom of speech already led to a pre-election demand that he be disqualified, despite the approval of his candidacy by the Guardian Council of the Constitution.

Senior officials in Iran’s Revolutionary Guard have stated that there might be a settling of accounts after the election by bringing Rowhani to trial for harming the welfare of the state. If Rowhani doesn’t clear the 50 percent barrier, the regime could try again to raise support for another candidate, as it did after the first round of the 2005 election when Ahmadinejad only garnered 19 percent of the vote, but carried away the second round with 60 percent of votes.

However, such a development will likely leave the regime facing strident confrontations with the public along the lines of the civil unrest that developed following the 2009 election. It is doubtful that Ayatollah Khamenei would want to try another violent series of battles like that one, which undermined his authority and revealed strong disapproval of the system of government.

The partial election results also attest to the deep rift among Iran’s conservatives who failed to unify around one main candidate. Not only that, but the paltry support for each conservative candidate attests to the deep sense of disappointment and mistrust the public has for the conservatives, including those who are considered more pragmatic like Mohammad Bagher Ghalibaf, Tehran’s mayor.

At the same time, the high voter participation rate in the election, some 70 percent according to Iranian Interior Ministry figures, likely attests to the fact that the Iranian public still trusts elections as a means for change, despite the trauma of 2009. It also likely shows that the reformists eventually decided to participate in the election despite their doubts before the election.

These elections, the most important in recent decades, place before Supreme Leader Ali Khamenei an unusual challenge, as the still partial results point to an erosion in his popularity, so that even his confidantes and loyalists, like Ali Akbar Velayati and Saeed Jalili, are lagging far behind.