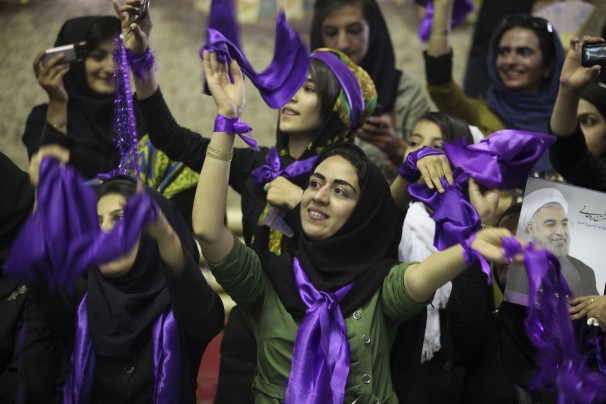 The moderate conservative cleric Hassan Rouhani is leading the race to be Iran’s next president, early results suggest.

Official figures give him about half of the votes counted so far in the contest to decide who will replace Mahmoud Ahmadinejad. More than 50% would mean he will avoid a run-off.

Iranian voters have been sharing their views about what the future may hold under a new president:

‘Incredibly this is a very open election’

Akbar, an estate agent in his 60s from Tehran, says he is overjoyed that Hassan Rouhani is leading the presidential race.

“Yes I did vote although I didn’t think it would change anything, but incredibly this is a very open election.

They are saying Hassan Rouhani has more than 50% of the vote which means he will win in the first round.

Nobody believed that would ever happen, we assumed a hardliner would be made the president.

I am surprised and overjoyed there is jubilation here.

We were in a real state before with the sanctions and the inflation. The economy was a mess with rising poverty and there was no economic reform. It was becoming utterly impossible to do business here.

This is evidence Iran is changing and is coming to grips with reality.

We must negotiate on the international side, this will have huge repercussions for our politics, with our role in Syria – we need to address should we be involved in that war at all, with our nuclear programme too.

I have lived in Iran for the past 35 years, for the duration of the current regime and I have a son who is also in business and a daughter who works in shipping dealing with transactions. The sanctions have hit imports in particular and the average Iranian income has gone down by a third because of exports.

‘Living in Iran is to live under constant tension’

Ali, a 20-year-old medical student in Isfahan, says he abstained from voting as he did not wish to legitimise the regime

“We are very angry about the government’s actions, which have made every day life very hard for us. The price of everything has become three times as much in the last year. A lot of young people have been put in prison too for criticising the government.

Yesterday some people wrote on a wall near my house, ‘Down with Khamenei’. One hour later the government people came and erased it. Living in Iran is to live under constant tension.

That is why I did not vote. None of my family voted. Our neighbours didn’t vote either.”

Masoud, a 28-year-old science researcher from Isfahan, says he hopes Mr Rouhani can get the sanctions lifted on Iran.

“The first thing I hope he will do is change Iran’s nuclear policy. Iranians don’t want a nuclear bomb. Not at any cost like Pakistan. They have a nuclear bomb but they can’t support themselves, they can’t keep the electricity running, they have no jobs. We don’t want to be like them.

Rouhani will change international policy and I hope he can lift the sanctions. It’s been really tough for ordinary people.

Other governments think they can control our government with sanctions but it doesn’t work, it just leaves us in even harder economic situation, but it won’t stop the government.

Foreign countries should take a fresh view of Persians. We will ask them to change their policy towards us because we selected a reformist to interact with other countries to solve this problem.

I was accepted for Phd study in America but our poor economy and the increase in the dollar meant that I wouldn’t be able to support myself financially over there, so I can’t go.

Ahmadinejad was only interested in the nuclear industry. During his rule many newspapers were forced to close in Iran.

I have two sisters. One of my sisters didn’t vote because she didn’t believe it would change, but my other sister voted for Rouhani.

She is very stylish with her hair and make-up and wanted to sew clothes in a factory but she couldn’t get a job because of the poor economy but also because she is a woman.

She voted for Rouhani to get more freedom for women. I voted for him to remove the sanctions and improve the economy so that I can study abroad.”