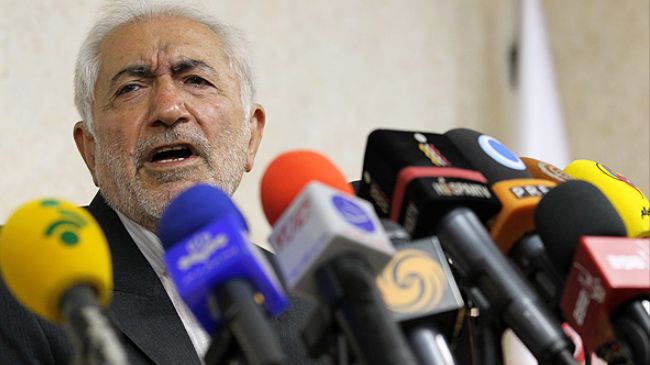 Next administration must subdue inflation: Gharazi

Presidential candidate Mohammad Gharazi answers questions at a press conference in Tehran on May 27, 2013.

Presidential candidate Mohammad Gharazi says the next administration has to curb inflation by regulating the financial markets in order to fix the country’s economy.

Speaking in a Question and Answer program broadcast on Iran’s state-run television network on Monday, Gharazi stated that he will form an anti-inflationary administration to curb rising prices of goods and services.

He said the best way to curb inflation is to have a fixed rate for the national currency.

The former Iranian telecommunication minister further noted that most Iranian administrations have only weakened the value of the national currency instead of doing the opposite, which would have been the right thing to do.

On June 10, candidate Gholam-Ali Haddad-Adel withdrew from the presidential race in favor of Principlists.

In an official statement, the former Majlis speaker said he would continue to help the Principlist camp win the election regardless of his withdrawal.

Haddad-Adel said he stepped aside after evaluating the situation and the realities on the ground.