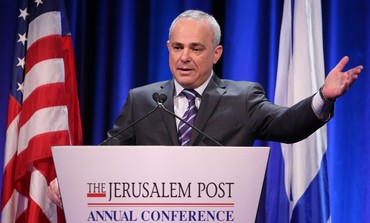 AFP – Iran is working round the clock to enlarge its nuclear infrastructure with the eventual aim of developing an industry capable of building up to 30 bombs a year, an Israeli minister charged on Monday.

But he said it was biding its time and building uranium-enrichment facilities before making the final push for weapons-grade material.

“Once they have 250 kilos, this is enough to make the final rush to 90 percent,” the level of enrichment required for a nuclear warhead, he said in a presentation to the Foreign Press Association.

“It is a matter of weeks or maybe two months to jump from 20 percent to 90 percent with so many centrifuges,” he said.

“What they are doing now — instead of crossing the red line, they are widening and enlarging their capacity by putting in more centrifuges, faster centrifuges.”

Iran’s aim, he charged, was to build a nuclear arsenal, not just a single bomb.

“Many people are saying it’s a question of the Iranian bomb – whether they will have it or not. No. We are speaking about an Iranian arsenal.”

Tehran’s big fear was that a Western military strike could wipe out their nuclear facilities “within a few hours,” he said.

“The Iranians feel very vulnerable, especially from American air operations. This is their main concern — that if the West, if NATO, if America decide to attack them, a few hours of accurate air raids might destroy their nuclear facilities.”

Israel and many Western governments suspect Iran is using its civilian nuclear programme as cover for developing a weapons capability, a charge denied by Tehran.

But the Jewish state, the Middle East’s sole, if undeclared, nuclear power, has refused to rule out a pre-emptive military strike to prevent it.

Steinitz also ruled out any change in policy that might result from the Iranian presidential elections which are to take place on Friday, saying the result was already known.

“Nothing is going to change. There will be, unfortunately, no significant changes because of these so-called elections because (supreme leader Ayatollah Ali) Khamenei has already won,” he said.

“He is the leader and he makes the decisions and he already made his decision to spend many billions of dollars on building this nuclear industry with only one aim,” he charged.

“The decision was already made to get nuclear weapons — you don’t spent so much money and you don’t suffer $70 billion of losses (due to international sanctions) in one year only to show that you can spin some centrifuges,” he concluded.