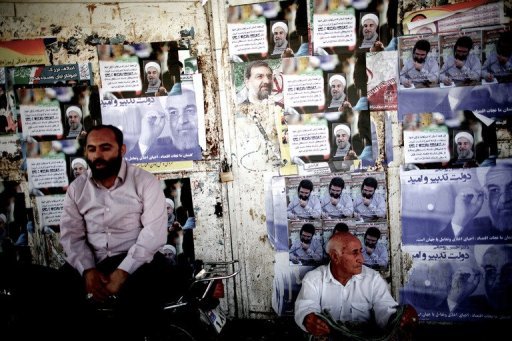 One of the four conservative candidates running for the June 14 election, Mohsen Rezai, said Ahmadinejad’s presidency had been more damaging than the tough international sanctions slapped on the Islamic republic.

“Sanctions are only to blame for 30 percent of the inflation. The remaining 70 percent is due to mismanagement,” he said.

“I’m not saying that the sanctions have not caused any problems, but the government’s mismanagement, which doesn’t allow us to benefit from the country’s huge capacity, is the main cause of the current situation,” said Qalibaf.

Candidates have often talked of “mismanagement”, referring to government projects focusing on small workshops scattered across the country, cuts to spending on housing projects, and reductions in energy and food subsidies.

Most of the seven candidates, comprising four conservatives, two moderates and a reformist, sharply criticised the incumbent administration in their televised debates.

Only Saeed Jalili, the country’s top nuclear negotiator, and conservative ex-parliamentary speaker Gholam Ali Haddad Adel, who dropped out of the race on Monday, have warned against painting a bleak picture of Iran’s current situation.

The two, both seen as close to supreme leader Ayatollah Ali Khamenei, were echoing a warning by the all-powerful cleric who has cautioned against undermining the achievements of all governments, including those of Ahmadinejad, reformist Mohammad Khatami and moderate Akbar Hashemi Rafsanjani.

“Never has a president been in possession of so much oil revenue,” said the sole reformist candidate, Mohammad Reza Aref, arguing the country’s oil income was recorded at $630 billion (477 billion euros) from 2005 to 2013 under Ahmadinejad.

Aref, who served as first vice president under Khatami, said the reformist government only cashed in $173 billion from 1997 to 2005.

“When have we ever been faced with such sanctions since the 1979 revolution? The situation was not even this difficult during the war” with Iraq in the 1980s, Hosseini said referring to harsh sanctions targeting the country’s oil sector, petrochemical exports, banking system, shipping lines and its insurance.

Iran’s oil revenue has dropped by “50 percent” in the past year, Hosseini said, warning the candidates that “they should know that the situation will not improve in the near future”.

Another member of the government, Mohammad Reza Mir Tajedini, said that “instead of presenting a plan, some candidates just appeal to demagoguery and paint a bleak picture”.

“Thirty strategic projects were executed in my presidency, including sending satellites into space and making progress in the nuclear programme,” he said.

The economic situation has drastically deteriorated since the beginning of 2012, as harsh new sanctions were imposed by the United States and the European Union, in an effort to force Iran to cut back on its nuclear drive.

Since then, the national currency, the rial, has lost over two-thirds of its value. And Iran’s inflation has exceeded 30 percent, according to official figures.

“We are faced with difficulties in repatriating our petrodollars due to the sanctions targeting our banking system,” Hosseini said referring to Iran’s oil sales to India, Turkey and China.

“Some deny the effect of the sanctions in the first place and blame the government,” said Ahmadinejad, whose close controversial aide Esfandiar Rahim Mashaei has been barred from standing for president by the country’s hardline electoral watchdog, the Guardians Council.

Although most candidates have pointed the finger at the government, they have been hesitant to promise a rapid economic recovery.

Qalibaf said that it would take him two years to curb inflation and make the country’s economy stable.

Another conservative candidate, Ali Akbar Velayati, said “according to opinion polls the priority for many Iranians is to mend the country’s international relations and for the sanctions to be lifted.”

“It is therefore necessary for a competent president to take office,” he said, hinting sanctions were responsible for the current crisis.