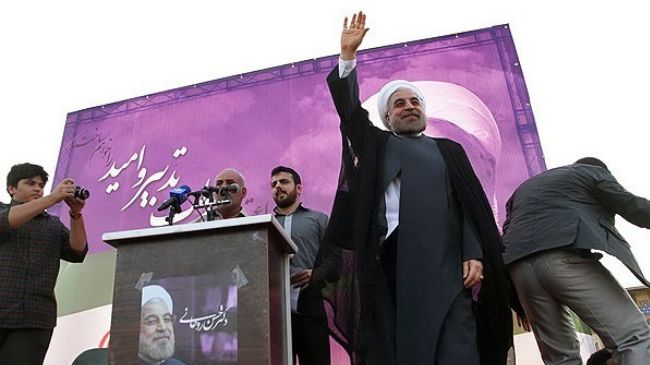 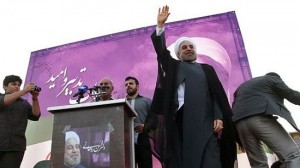 Addressing a packed Tehran stadium, presidential contender Hassan Rohani urged the throng of young voters to overcome their frustration over the lack of jobs and Iran’s pariah status and back him in the June 14 election.

“If you want Iranian officials to stop presenting inaccurate economic data, if you want the rial to regain its value, if you want the Iranian passport to be respected again, come to the ballot boxes,” Rohani told about 9,000 people at a June 8 campaign rally in Tehran.

After the re-election of Mahmoud Ahmadinejad in 2009, activists accused authorities of using ballot fraud to deny a reformist candidate victory. Having witnessed the subsequent crackdown on protesters, some young voters said they had no plans to vote this time, an angst Rohani is trying to tap into.

“If we look at Rohani’s rhetoric, his appearance and his campaign, he’s the closest among candidates in this race to a reformist,” said Mahjoob Zweiri, a professor of Middle East politics at Qatar University. “He could attract some of the young voters.”

Rohani supporters entering the stadium June 8 were handed purple wrist ribbons, the color he’s using on campaign posters. The move may be inspired by opposition leader Mir Hossein Mousavi’s 2009 campaign, which so became associated with the color green that the opposition wave born out of post-vote protests later became known as the Green Movement.

Some of the supporters, which consisted mostly of middle-class Iranians in their early 20s, also wore purple headscarves, headbands or T-shirts. Backers packed the venue in downtown Tehran, and a spillover crowd lined the street outside.

Rohani is the only cleric among the eight presidential candidates. His careful grooming contrasts with Ahmadinejad, whose unkempt appearance and casual dress initially connected him with some voters.

Rohani, Iran’s chief nuclear negotiator under former President Mohammad Khatami, has spoken in favor of increased freedom for the press and non-governmental organizations. He has also called for the easing of social restrictions on the population, criticizing the government’s “unwarranted interventions” during a June 7 debate.

“I didn’t want to vote, but after the political debate on Friday night, I decided to vote for Rohani,” said Shaghayegh, a 20-year-old university student who attended Rohani’s rally and like many in the country didn’t give her surname because she was uncomfortable speaking to media based outside of Iran.

“Our country’s image in the world has been destroyed,” Shaghayegh said. “I want a president who I can be proud of and who can help us be proud of our country.”

Iranian authorities have been less tolerant of political criticism or activities since the 2009 protests. Mousavi and another candidate who ran against Ahmadinejad and alleged vote rigging are under house arrest. Top officials said the unrest reflected “sedition” engineered by western nations.

Marzieh, a 23-year-old law student said she would vote for Rohani because of his message of political tolerance.

“Hopefully, he will allow different points of view to coexist in the country, unlike under Ahmadinejad,” she said.

Since 2005, when Ahmadinejad was first elected, Iran has been battered by sanctions that have restricted its financial transactions with the world, cut its oil exports and weakened the national currency, turning the economy into a central issue in the race.

Inflation in April was 32 percent, and a quarter of all Iranians aged 15 to 29 were unemployed in the last Iranian year ended March 20, according to official figures.

“Some want the path of the previous eight years to continue, some are still proud of domestic poverty and foreign-imposed humiliation,” Rohani told his supporters. “I will bring dignity back to students.”

Iran’s economy is projected to contract 1.3 percent this year, according to the International Monetary Fund, the second year of shrinking output after a 1.9 percent drop in 2012.

“I will seek to bring back stability to the country through prudence, planning and hope,” Rohani said.

While the eight candidates running say they back Iran’s right to have a civilian nuclear program, Rohani and some others say technological progress shouldn’t come at the expense of the economy and the well-being of the population.

“It’s fine for centrifuges to spin if people are also getting by,” Rohani said in last week’s debate, referring to Iran’s nuclear progress.

Azar, whose 54 years of age put her among the oldest at Rohani’s rally, said she came to accompany her three daughters.

“After the events of 2009, I’m not so hopeful about the outcome of this election,” Azar said. “But these kids want freedom and they believe we are long overdue for a change.”