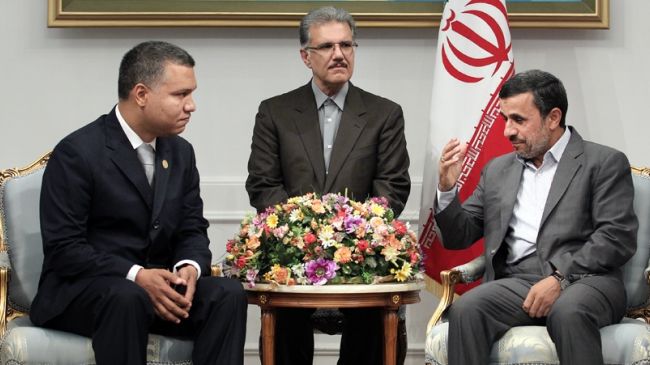 Iranian President Mahmoud Ahmadinejad has hailed Iran-Venezuela ties, saying the two nations will stand by each other as they have common enemies, ideals and goals.

In a Monday meeting with the new Venezuelan Ambassador to Tehran Amenhotep Zambrano, President Ahmadinejad said that relations between the two countries are at a very high level and are growing stronger by the day.

“Iran and Venezuela are on the same front and have common enemies, ideals and goals and will stand firmly by each other,” the Iranian president added.

He said nothing can prevent the deepening of friendship and brotherhood between the two countries as they “are beyond bilateral diplomatic ties and will last forever.”

President Ahmadinejad said Latin American nations have awakened and are treading the path of independence, dignity and resistance, which will lead to victory.

He also praised the late Venezuelan President Hugo Chavez as a great figure and the symbol of resistance.

In the meeting, the Venezuelan ambassador submitted his credentials to the Iranian president and praised bilateral ties between the two countries, saying imperialism is rattled by Iran-Venezuela unity.