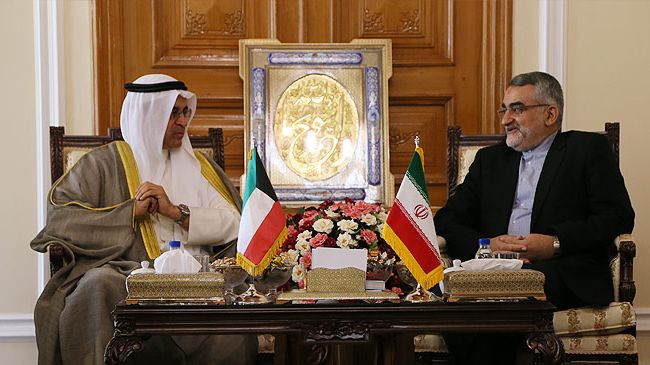 A senior Iranian lawmaker describes dialog among regional countries as the only way out of problems such as the Damascus unrest, saying Iran supports a peaceful solution to the Syria crisis.

Alaeddin Boroujerdi, Chairman of the Majlis National Security and Foreign Policy Committee, made the remarks in a Monday meeting with the visiting head of the Iran-Kuwait Parliamentary Friendship Group Ahmad Abdulmohsen al-Mulaifi in Tehran.

He pointed to good political, economic, and cultural relations between Iran and Kuwait and underlined the need for the expansion of friendly ties, in particular parliamentary cooperation.

The great wealth of commonalities between the two Muslim countries calls for their close cooperation in settling issues of the region and the Muslim world, Boroujerdi added.

Commenting on the interference of the US and its allies in the region, the Iranian lawmaker said “the only solution to restore stability and peace in the …[Middle East] is the withdrawal of American forces from the region.”

Al-Mulaifi, for his part, called for the development of friendly ties with the Islamic Republic and said the Kuwaiti parliament is keen on boosting ties with Majlis.

He praised Iran’s efforts to restore peace in the region and said Kuwait calls for constant dialog and consultations with Iranian officials with the aim of resolving regional issues.

He described Iran as an independent and powerful country, which plays a significant role in securing regional stability and peace.

Iran has repeatedly expressed its opposition to any foreign intervention in Syria’s internal affairs, stressing that inclusive dialogue and national reconciliation as well as free elections are the keys to resolving the unrest in the Arab country.