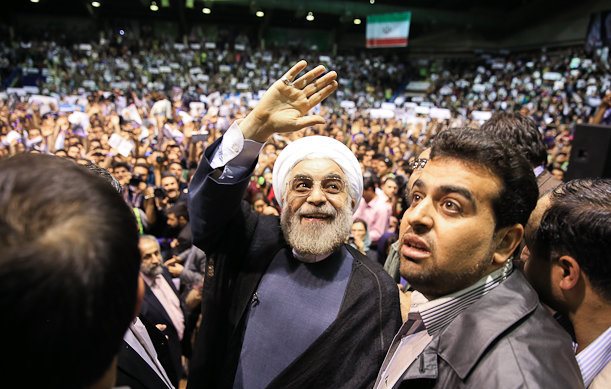 In Iran race, all 8 candidates toe hard line on nuclear might

“No compromise, no submission, only Jalili!” they shouted, while waving a handwritten placard with the text: “Negotiating with Satan is against the Koran.”

They are among many who support Mr. Jalili, who is the presidential candidate favored by Iran’s hard-liners in Friday’s presidential election.

He has built his campaign around implacable “100 percent” opposition to compromise with the West over the country’s nuclear program. And while he and the seven other carefully vetted candidates might disagree on issues like women’s rights and economic troubles, when it comes to Iran’s nuclear program they are all saying the same thing: there will be no backing down, no bargaining away the nation’s perceived right to enrich uranium for power generation.

Even his opponent on the far side of Iran’s narrow political spectrum, the cleric Hassan Rowhani — the closest any of the candidates comes to the reformist camp — avoids any mention of the word “compromise” when discussing the nuclear program. He spends much of his time fending off attacks from political opponents who accuse him of having already sold out the country’s rights when he was the nuclear negotiator by temporarily suspending uranium enrichment while under heavy international pressure in 2004.

Hoping to force Iran to stop enriching uranium and begin negotiating in earnest, the Obama administration has imposed tough economic sanctions that appear to be wreaking havoc on Iran’s economy. But if the presidential campaign is any indication, rather than forcing a capitulation, the sanctions seem only to have stiffened Iran’s will to resist.

“Year after year, America has imposed harsher sanctions on us,” said Nader Karimi Joni, an Iranian journalist who is critical of certain state polices. “Now, with these candidates, we see the consequences: the sanctions hurt, but they have made our leaders much more determined.”

The stances of Mr. Jalili, the current nuclear negotiator, and Mr. Rowhani, the former negotiator, illustrate how much Iran’s position has hardened after a decade of escalating sanctions and increasing international isolation.

Mr. Jalili, in particular, has turned the election into a referendum on the country’s nuclear stance, banking on the support of Iran’s governing establishment, a mix of conservative clerics and Islamic Revolutionary Guards commanders for whom anti-Western sentiment is a staple.

Mr. Rowhani, who has been attracting support from some of the veterans of the now silenced green movement, led the first rounds of negotiations with Western countries, after the 2002 disclosure of Iran’s secret nuclear program.

Under his watch, two years later, Iran temporarily suspended enrichment of uranium as a confidence-building measure, but the Western powers stood by their demand that the entire program be terminated, accusing Iran of seeking nuclear weapons.

Mr. Rowhani now finds himself mocked by the Jalili camp, which cites those negotiations as an example of ignorance and weakness.

“We disarmed ourselves” by suspending enrichment, an official of Mr. Jalili’s campaign said in a film shown on state television last week.

“They assumed we would suspend, shut down and destroy our nuclear facilities,” Mr. Jalili himself says in the film, quoting Joschka Fischer, who was then Germany’s foreign minister. “Resistance is the solution to our problems,” he says over and over again.

As talks waxed and waned, Iran’s nuclear program ballooned. Following the end of suspension in 2005, Iran went from having two dozen test centrifuges to having nearly 17,000, according to the May 2013 report by the International Atomic Energy Agency.

The current sanctions against Iran have slashed the value of its currency, aggravated its already high inflation rate and cut many of its financial ties to the rest of the world. Iran is increasingly resorting to barter trade with remaining oil buyers India and China as financial transactions have become nearly impossible.

But there are few if any signs of the sanctions’ effects on Iran’s streets. Gas stations have plenty of fuel, supermarket shelves are still filled and in recent months the currency, which lost half of its value over the past year, has been stable.

To give in to the pressure would hurt Iran’s negotiation position, all the candidates agree. “Only on the day that the Americans lose hope in all sorts of plots, military war and economic war, will we be able to hold talks based on logic,” another candidate, Gholam Ali Haddad Adel, said on state television.

“Logic” is a code word, analysts say, which translates as accepting the Iranian position that it has a “right” to enrichment without restrictions.

Mr. Rowhani, a close ally of the pragmatic Ayatollah Ali Akbar Hashemi Rafsanjani, who was barred from the race by the conservative Guardian Council, is one of just a few prominent politicians proposing better relations with the outside world.

And he offered a pointed reminder in a televised debate by presidential candidates on Friday, noting that the suspension of enrichment in 2004 happened “under the leader’s guidance,” meaning that Iran’s supreme leader, Ayatollah Ali Khamenei, had signed off on it.

There are other politicians who have questioned the government’s recent negotiating stance, if not the commitment to nuclear development.

During the debate, one presidential candidate, Ali Akbar Velayati, a former foreign policy adviser to Mr. Khamenei, argued that Mr. Jalili, with all his talk of never compromising, had in essence made no progress, either.

“You want to take 3 steps, and you expect the other side to take 100 steps. This means you don’t want to make progress,” Mr. Velayati said. “We can’t expect everything and give nothing.”

Many analysts, however, note that two major factors run against any softening: widespread public support for nuclear power and, even more important, the will of Ayatollah Khamenei.

“It is our people who do not allow the candidates to talk of compromise,” said Hamid Reza Taraghi, an analyst with viewpoints close to that of Iran’s governing establishment of conservative clerics and military commanders. “And our supreme leader also says there is no room for a nuclear compromise.”

In an address on Tuesday, Ayatollah Khamenei acknowledged that Iran was suffering from economic problems and inflation, but he stressed that anybody thinking that appeasing Western countries was the key to a solution was mistaken.

“Some have this wrong analysis that we should make concessions to the enemy in order to lighten the anger they have against us,” Mr. Khamenei told an audience at the annual commemoration of the death of the founder of the Islamic republic, Ayatollah Khomeini. “In fact, they prefer the enemy’s interests to the interests of the nation. This is wrong.”

By The New York Time