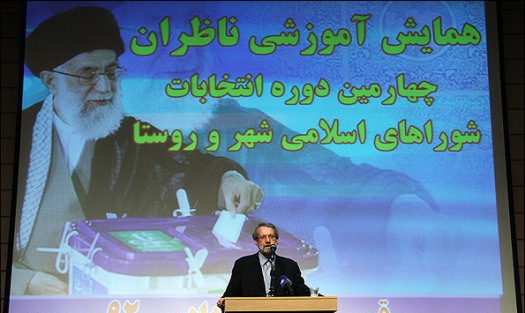 Parliamentary speaker Ali Larijani chose not to stand in this year’s Presidential election. But far from withdrawing from the political scene, Larijani may have made a shrewd move which stands to increase his power after June 14.

As the principlist candidates not only fail to find unity but reveal growing divisions amongst themselves, Larijani is able to watch and wait, and look to use his position to broker power with whoever becomes the next President.

For example, should Jalili be chosen as President, “Larijani will roll over the attempted choice of cabinet ministers in August,” according to an EA correspondent in Iran.

The correspondent continues: “Larijani’s strategy is very smart. He will be the one to whom conservatives turn after these elections”.

On Sunday, Mehr News reported comments from Larijani, quoting him as saying that the authenticity of the council and Presidential elections should not be questioned and that the candidates must guard against enemy attempts to abuse the process.

The philosophy of holding those two races together was so that the country was not constantly engaged in elections, Larijani said.

The Rouhani campaign also tweeted a link to a set of photographs taken at the event by ISNA. The photographs include this image of two women supporters, one if whom holds a picture of Rouhani with former President Hashemi Rafsanjani, while the second woman holds a folded newspaper, with a photo of Rouhani.

Will There Be A Fourth Presidential Debate?

In the wake of Friday’s third — and supposedly final — televised Presidential debate on State TV, the Islamic Republic of Iran Broadcasting has said it may hold a fourth event, if it gets approval.

Press TV reports that IRIB’s public relations MD, Taqi Sohrabi, said that the Presidential candidates themselves as well as Iranians had asked for more debates.

Some of the Presidential candidates, however, have slammed IRIB over the debate. Independent candidate Mohsen Rezaei complained about being censored and moderate candidate Hassan Rouhani criticized the format of the debates: