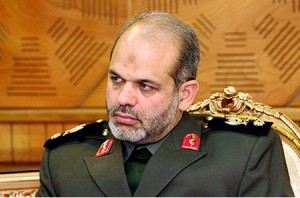 Iran’s media says that it has set up its first center to monitor objects passing in orbit overhead. A Sunday report by the semi-official Irna news agency quotes Defense Minister Gen. Ahmad Vahidi as saying the center will continuously track objects moving in space, and that it is ready to share data with other countries.

Iran says President Mahmoud Ahmadinejad has visited a planned nuclear reactor that’s part of a growing dispute between Tehran and the U.N.’s atomic agency. The official IRNA news agency said Ahmadinejad’s visit Sunday coincided with the beginning of operations to install the main cap at the heavy water reactor in Arak, about 255 kilometers (152 miles) southwest of Tehran.

Less than a week to Iran’s presidential election, the Society of Qom Seminary Instructors have announced their support for presidential candidate Ali Akbar Velayati. In a statement issued on Sunday, the society announced its official support for the former Iranian foreign minister.

The new Pakistani government has reiterated its determination to continue the joint gas pipeline project with Iran saying the issue of energy is Islamabad’s top priority.