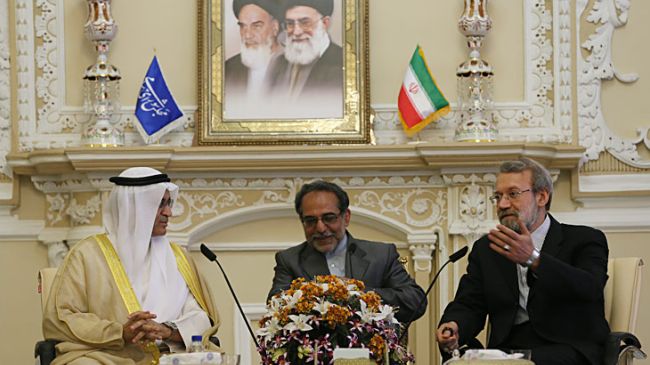 Enemies plotting to cause rift among Muslim nations: Iran Speaker

Iran Majlis Speaker Ali Larijani has warned against plots to sow discord among Muslim nations, stressing the importance of reinforcing unity and negotiations on key regional and international issues.

“Certain powers foster fear among Muslim countries and strengthen extremist and radical groups in the region in order to create rift among Muslim nations and weaken (them),” Larijani said on Sunday.

He made the remarks in a meeting with the visiting head of Iran-Kuwait Parliamentary Friendship Group Ahmad Abdulmohsen al-Mulaifi in Tehran.

Larijani pointed to the ongoing crisis in Syria and stated that political dialog among different Syrian groups is the only solution to the unrest in the Arab country.

The crisis in Syria began in March 2011, and many people, including large numbers of soldiers and security personnel have been killed in the violence.

Reports show the chaos is being orchestrated from outside Syria and that a very large number of militants are foreign nationals.

Al-Mulaifi, for his part, said the Muslim Ummah is going through a sensitive time and urged using wisdom, dialog and negotiations to remove obstacles in the way of the unity and progress of Muslim countries.

Meanwhile, in a Sunday meeting with the Kuwaiti official, Iranian Foreign Minister Ali Akbar Salehi said the Islamic Republic’s principled policy is based on promoting peace, stability and security in the region in line with the interests of all regional nations and based on mutual respect and non-interference in the internal affairs of countries.

He pointed to the ongoing crises in the region, including the Syria crisis, and stressed the importance of determining Syria’s fate by the Syrians without the interference of foreign powers.

Salehi called on regional countries to boost interaction in order to help the Syrian people and government resolve the crisis at the earliest.

Al-Mulaifi, for his part, said the intensified violence and sectarian strife would only inflict harm on innocents, calling for the resolution of problems on the basis of understanding and dialogue.

June 9, 2013
Photos: Iran in the past week
No attack on Beirut Embassy: Iran’s Araqchi