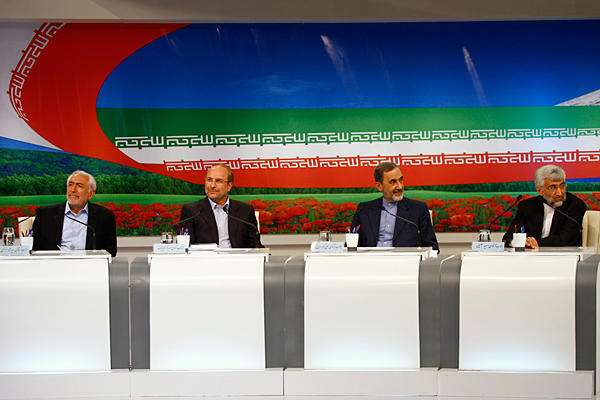 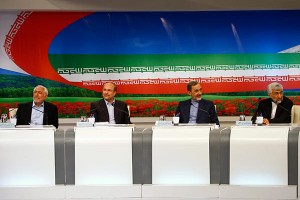 Eight Iranian presidential candidates have taken advantage of their third and final televised debate to energize their fan bases and score points on politics,Press TV reports.

Domestic and foreign policy took the center stage in the live presidential debate on Friday, with candidates spotlighting and criticizing each others’ past and present performances.

The key questions during the heated debate were about foreign diplomacy, national security and resistance, Iran’s nuclear energy program, Western sanctions, war on Syria, Islamic Awakening, the challenges of a changing Middle East and the new face of the state terrorism.

Velayati criticized Jalili for failing to resolve the issues regarding Iran’s nuclear energy program during his tenure, saying, “This is not diplomacy.”

In response, Jalili refuted Velayati’s remarks against his diplomatic track record, saying, “You shouldn’t manipulate the information and news.”

Reformist candidate Hassan Rohani pointed to criticism of his performance as Iran’s former chief nuclear negotiator by candidate Mohsen Rezaei, noting, “You are the same person who said that the [UN] Security Council (UNSC) was better than the [IAEA] board of Governors.”

During his campaign, Rohani has repeatedly defended his track record as the former chief nuclear negotiator, from October 2003 to August 2005, and highlighted his success in preventing Iran’s dossier from being referred to the UNSC.

The United States and the European Union have used the allegation that Iran pursues non-civilian objectives in its nuclear energy program as a pretext to push the UN Security Council to impose four rounds of sanctions on the Islamic Republic between 2006 and 2010.

Analysts have described the final debate as a political platform for the candidates to reach out to voters and present their views on domestic challenges, including social media freedoms, civil rights, private rights of individuals, freedom of expression, as well as management reshuffles.

Reformist candidate Mohammad Reza Aref criticized Iran’s social, cultural and political situation saying, “My question is, who is responsible for the present situation…. People have the right to know.”
Principlist candidate Gholam-Ali Haddad-Adel accused Rezaei of seeking to portray himself as the nation’s only well-wisher and for undermining the goodwill of the other officials.

Independent candidate Mohammad Gharazi, for his part, criticized the other candidates for squabbling over past issues and forgetting about their current plans.

It is still unclear which of the candidates has the highest popularity rating following the Friday debate, as the high number of candidates is likely to split the vote and take the race to a second round.

Meanwhile, following the requests by the people and presidential candidates for more live televised debates, the Islamic Republic of Iran Broadcasting (IRIB) has announced its readiness to hold another debate if the organization’s advertisement commission approves the move.

The candidates had earlier discussed their economic and socio-cultural policies in two previous debates.

On June 14, Iranians will cast their ballots at over 66,000 polling stations across the country in the nation’s 11th presidential election. Iranian nationals will also be able to vote at 285 polling stations which will be set up overseas.