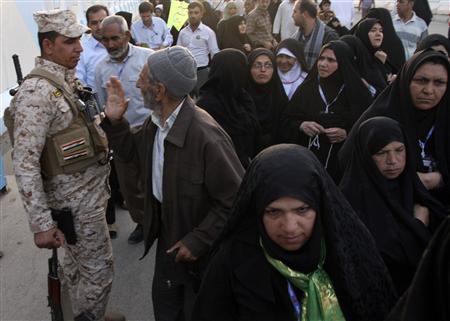 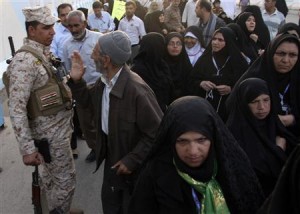 (Reuters) – Suicide bombers smashed their cars into a bus full of Iranian Shi’ite Muslim pilgrims and a police checkpoint in Iraq on Friday, killing at least 17 people.

Al Qaeda’s local wing and other Sunni insurgents have been on the offensive in an attempt – spurred in part by the mainly Sunni rebellion in neighbouring Syria – to provoke the kind of Shi’ite-Sunni bloodshed that killed thousands in Iraq in 2006-2007.

“When the buses passed, a white car driving very fast came out of an alleyway and hit the second bus, and I saw that bus burst into flames,” said Ahmed Ferhan, an Iraqi man injured in the blasts.

At least nine people were killed and 27 wounded, according to police. But an official with Iran’s Hajj and Pilgrimage Organization told the semi-official Fars news agency that based on preliminary information, 16 Iranians had been killed and 44 wounded.

At least eight other people were killed, including four civilians, and 17 more wounded, when two suicide bombers in cars attacked a police checkpoint in al-Hamdhiya, just east of the city of Ramadi, a police source said.

Nearly 2,000 people have been killed in attacks in Iraq since April, the highest toll in five years, in surging violence that could tip the country back into all-out inter-communal war.

The violence reflects worsening tensions between Iraq’s Shi’ite-led government and the Sunni minority, resentful at their treatment since Saddam Hussein was overthrown by the U.S.-led invasion of 2003.