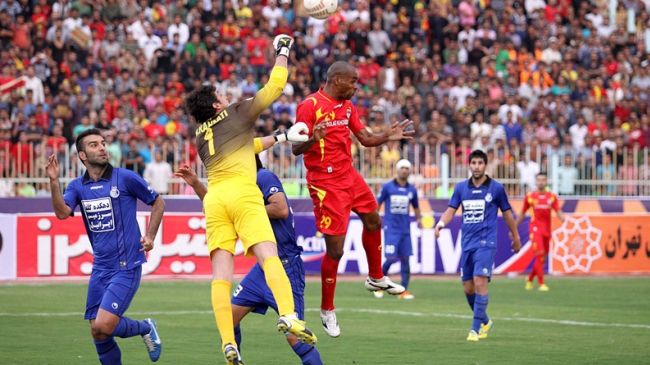 Sports an issue in Iran’s elections

A scene of the match between Esteqlal and Foulad held in the southwestern Iranian city of Ahvaz on May 5, 2013.

“Should I get elected, my government will transfer the management of sports back to professionals.”

This was one of the statements by presidential candidate Ali Akbar Velayati during a televised debate on June 5.  This reference to sports is a reflection of a key deficiency in Iran’s sports activities during the Ahmadinejad years. In fact, a number of leading sportsmen, head coaches of popular clubs and other stakeholders have complained that in the past few years, a number of sports clubs and affairs have been transferred to political or military organizations. This fact has undermined the performance of Iranian clubs and has led to tensions between professional and political stakeholders.

It is not a secret that sports has been politicized in Post-revolutionary Iran, especially in the past decade. The intersection of politics and sports is not just limited to politicized sports decisions (such as rejecting any competition against Israeli athletes), but includes the growing role of sports personalities in political offices. In fact, a number of popular sports personalities (such as two-time Olympics gold medalist in Taekwandoo Hadi Saee and leading wrestlers Amir Reza Khadem and Alireza Dabir) have entered politics in the Tehran City council. Even more sports personalities have signed up for the upcoming local council elections. Also, the creation of a Ministry of Youth and Sports paved the way for former athletes to enter the government.

However, what Velayati and other candidates are referring to, is a growing concern among key professional stakeholders; i.e., the systematic takeover of leading football clubs by military and intelligence entities in the past few years.

In some cases, the IRGC has fully taken over the ownership of clubs (such as the Shiraz-based Fajr or the Mashhad-based Abu Muslem) and, in other cases, the same groups have penetrated the management of public clubs, such as the imposition of Mohammad Rouyanian (former deputy head of police) on the most popular Tehran club, Persepolis, as well as similar schemes for the Tabriz-based club Tractorsazi; i.e., the two clubs that along with this year’s league champions, Esteghlal, have the highest number of supporters across the country.

Furthermore, the country’s football and other federations have been penetrated by former IRGC commanders who have little to offer as sports specialists. The main reasons for the involvement of these organizations in the ownership and management of these clubs and federations is the ability of sports clubs to mobilize hundreds of thousands of people for social and political events. The mobilization factor is seen as a political risk to a regime that is afraid of its own citizens, especially in the post 2009 events. In fact, the main event that led to an alarm in the country’s intelligence community was Iran’s World Cup qualifying match in South Korea in June 2009, when eight out of 11 national players entered the match with a green wrist band in support of the Green Movement protests in the aftermath of the disputed elections.

Though that expression of sympathy was crushed and the players were asked to take the wrist bands off, no one doubts that popular sports personalities are closer to the reform-minded politicians in Iran — and they have not been afraid to express their feelings and their criticism. A respected celebrity in the post-2009 events was the late national goalkeeper, Nasser Hejazi, who publicly criticized the government’s policies.

As a reaction to the  growing dissent emerging from sports celebrities, the military and intelligence officials not only took over some of the key clubs and put a lid on some of the activities of leading sports personalities, but they also felt compelled to put a banner on the jerseys of two football clubs (Pas and Peykan) that they controlled in 2010 which read: “Sabz faghat sabz-e Ali, Rahbar faghat Seyed Ali” — meaning “the only Green belongs to Imam Ali and the only Leader is Seyed Ali (Khamenei).” Interestingly, as fate would have it, both those clubs dropped to the lower football league in that year, which led to rumors that they paid for their allegiance to Khamenei.

Presidential candidate and Tehran Mayor Mohammad Baqqar Qalibaf recognized the potential of the popular clubs when the Municipality of Tehran and its principal bank (Bank-e Shahr) became the main sponsors of all three aforementioned clubs in 2011. Qalibaf’s attempts to maintain the status until 2013 were pushed back by the government, which did not want Qalibaf to benefit from its close links with these clubs.

In 2013, sports clubs and personalities can still play an important role in mobilizing popular support. With no league matches to be played, the national team is in the spotlight. On June 11, Iran will play Lebanon in Tehran as a qualifying match for Brazil 2014. There are already rumors that the spectators will start chanting slogans that can be translated as “Forget Gaza and Lebanon and attend to Iran” — a slogan of the Green Movement in 2009 street demonstrations. It can also be expected that some of the candidates will try to capitalize by going to the Tehran Azadi Stadium and showing their support for the national team. National team members are also looking for opportunities to indirectly indicate their preferences — for example. some of the leading footballers have paid visits to Hassan Khomeini, the grandson of the late leader and a vocal supporter of reformist factions in Iran.

Football will play a role on an emotional level as well. Should Iran beat Lebanon on June 11, it will become very likely that Iran would qualify directly for Brazil which will boost the general mood in society, especially among youth. The happier mood would make a higher voter turnout more likely.  Furthermore, should the elections go into a second round on June 21, then the national football team will find two more opportunities to express their support: once, during their final qualifying match in South Korea on June 18 and once upon their return to Tehran. Assuming that they would have officially qualified by then, their reception in Tehran would include a big crowd where candidates would be keen to secure the support of popular footballers, and where intelligence officers will try to make sure that the gathering does not become an anti-regime demonstration.

It remains to be seen if under a new president the military and intelligence entities will withdraw their grip on the football scene. However, now that they have tasted the financial and socio-political benefits of this new sector, it will take a major effort to push them back.