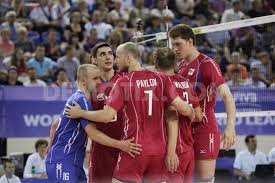 TEHRAN, Jun. 8 (MNA) – Iran volleyball team was defeated by Russia in the first Pool B match of the 2013 World League on Friday.

Iran will play Russia on Saturday in this two-match set.

Russia has won the World League twice (2002 and 2011), making it one of only three countries to have won it multiple times along with Brazil (nine times) and Italy (eight times).