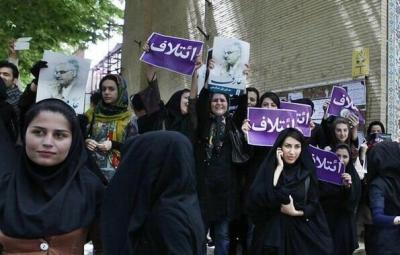 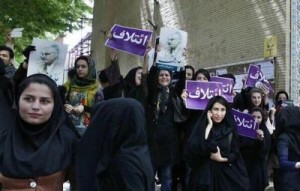 With just a week to go before the first round of the Presidential election, moderate candidate Hassan Rouhani’s campaign team have hinted strongly at a coalition between his camp and that of reformist candidate Mohammad-Reza Aref.

Rouhani’s campaign office said Thursday that there could be a possibility of such a move within the next days, and used social media to push the same message. Rouhani’s Twitter account tweeted photographs of Aref supporters holding banners calling for a coalition.

Via careful use of social and traditional media, as well as via TV appearances and campaign documentary, Rouhani’s campaign has crafted an image of a strong candidate who is close to the people and who appeals to a broad camp of voters. A new campaign website, featuring the key image Rouhani has used as his campaign symbol, shows photographs of supporters of all ages, including women.

Rouhani’s campaign documentary, which aired this week — and which his campaign published on the internet beforehand, to increase viewings and in case any of it was censored — the moderate candidate talked about how the Islamic Republic was in a “cultural, economic and political winter” — a quote from Persian poet Mehdi Akhavan-Sales.

While appealing to moderate conservatives — for example by emphasizing the need for a strong Islamic Republic by talking Thursday about how Iran should use its soft power to counter military threats —Rouhani’s campaign of “Prudence and Hope” is also courting Reformist and even Green voters with comments about personal freedoms and censorship.

Rouhani is also trying to show that he has the backing of other leading political figures. In an announcement via Twitter about a conference Saturday in Tehran’s Shiroudi stadium, Rouhani used a green-tinted photograph of himself, flanked by former Presidents Hashemi Rafsanjani — disqualified from standing the campaign — and Mohammad Khatami.

However, if Rouhani — and by extension the reformist camp — want to make an impact in the June 14 vote, he will need to come to an agreement with Aref to avoid splitting the vote.

So will Aref step down in favor of Rouhani? And if so, how soon before the June 14 poll will that announcement come?