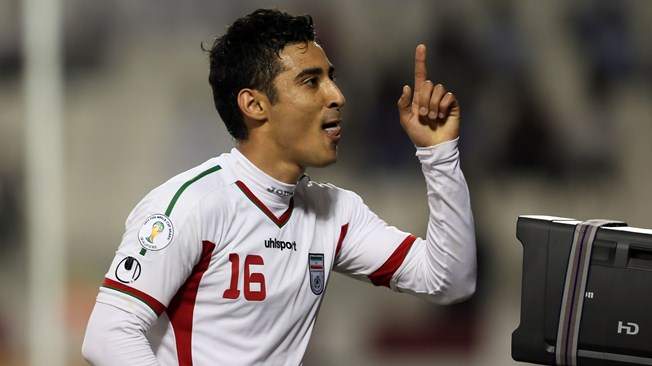 Iran got their World Cup qualifying campaign back on track after Reza Ghoochannejhad’s 66th-minute strike gave them a 1-0 win against Qatar at Doha’s Al Sadd Stadium.

Carlos Quiroz’s team stay third in Group A on 10 points from six games, a point behind second-placed Uzbekistan and leaders South Korea, who drew 1-1 with bottom side Lebanon in Beirut.

“We will not celebrate as we have still two matches remaining,” Iran’s assistant coach Antonio Simoes said.

“We have achieved an important three points and a good victory and I want to thank the players who followed the tactics and this helped us to get a positive result.”

The defeat all but ended Qatar’s hopes of a first World Cup finals appearance as they are now three points behind Iran and have only one game left away to Uzbekistan.

The top two from the group qualify directly for next year’s finals in Brazil, while the third-placed team will still be in with a chance of joining them via the playoffs.

There was little goalmouth action in the early stages in Doha with Mojtaba Jabari’s 21st-minute effort for Iran from the edge of the box presenting the first goalkeeping test.

The hosts maiden opportunity came when Ibrahim Khalfan rolled the ball to Hasan al Haydos but his effort hit the bar.

Qatar keeper Qasem Burhan then made two outstanding saves, tipping Masoud Soleimani Shojaei’s curling free-kick over the bar and beating out Ghoochannejhad’s point-blank header with one hand while moving in the other direction.

The second half was more physical and Iran’s sustained pressure eventually paid off when a defensive error sent the ball to Ghoochannejhad who scored past the advancing Burhan.

Iran could have doubled their lead in the 79th minute but this time Ghoochannejhad could not beat Burhan who charged out of the box, earning himself a yellow card for a foul on the forward but denying the visitors another goal.

Qatar coach Fahad Thani said a draw would have been fair, adding: “Iran were physically strong and were good in defence. We played well but didn’t take advantage of the chances we had as we were without the player who could finish those chances.