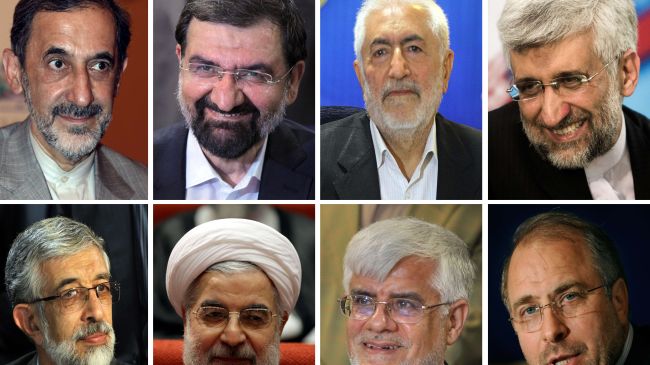 (CNN) — Voters in Iran will cast their ballots on June 14 for the country’s next president, a man who will play a pivotal role in foreign and nuclear policy and who must also address economic challenges worsened by sanctions and international isolation.

“The central issue of this election is about how to manage the economy better in the face of a debilitating sanctions regime. The main campaign slogans are competence and prudence, I assume developed in reaction to what is deemed as Ahmadinejad’s somewhat erratic and bombastic management of the country,” said Iranian scholar Farideh Farhi.

This is connected to the question of whether Iran can run its foreign policy in such a way “so as to mollify the external forces that are intent on further isolation and squeezing of Iran,” she says. But Farhi adds that “the focus is mostly on tactical shifts and not a major overhaul of Iran’s approach to the nuclear file or foreign policy.”

Iran’s Guardian Council — made up of six clerics and six lawyers and operating under the oversight of the Supreme Leader Ayatollah Khamenei — has approved eight candidates to run in the election, out of more than 680 who registered.

Iran’s president is the country’s highest official after the Supreme Leader and is responsible “for implementing the Constitution and acting as the head of the executive, except in matters directly concerned with (the office of) the Leadership.”

Current President Mahmoud Ahmadinejad is unable to stand as three consecutive terms in office are not allowed in Iran. Although Khamenei had supported Ahmadinejad in the 2009 elections, the two have since become locked in a battle for power.

Of the eight candidates allowed to contest the presidency, five have close ties to Khamenei, while Ahmadinejad’s protege, Esfandiar Rahim Mashaei, has been disqualified.

“What we see here is a consolidation of power in the Office of the Supreme Leader that has been carried out steadily over the past four to six years” said Ali Ansari, founding director of the Institute for Iranian Studies at St. Andrews University in Scotland.

Ahmadinejad arrived at the Ministry of Interior with Mashaei — whose vice presidency had been publicly rejected by the Supreme Leader earlier this year. The current president’s involvement was immediately criticized and called “illegal” by the Guardian Council spokesman Abbas-Ali Kadkhodaei.

Middle East expert Geneive Abdo says Ahmadinejad had been positioning Mashaei as a presidential candidate for years. The two are not only like-minded in their nationalism and shared disdain for the clerical establishment, but are also relatives — Ahmadinejad’s son is married to Mashaei’s daughter, she says.

Ansari suggests that many in Ahmadinejad’s cabinet and even the president himself could be persecuted after the elections. “Ahmadinejad has many enemies now and in Iranian politics when you’re out, you’re out and he’s now worried that his turn has arrived,” he said.

Former president and political heavyweight Akbar Hashemi Rafsanjani — who had criticized the regime’s crackdown after the 2009 elections — has also been banned from the race.

Ansari said Rafsanjani was considered a “pillar of the establishment” and the decision had taken many by surprise.

Notably, Zahra-Mostafavi Khomeini — daughter of the Islamic Republic’s founder Ayatollah Ruholhah Khomeini — penned an open letter complaining of Rafsanjani’s rejection and suggesting that her father had also considered Rafsanjani as suitable for the role of Supreme Leader.

The outcry over Rafsanjani’s disqualification — despite a checkered past — shows just how desperate the Iranian people are for change, according to the Director of Stanford University’s Iranian studies program, Abbas Milani.

“After all of the attacks, after the reformists going after him with a vengeance, after Ahmadinejad going after him for 8 years, after the IRGC, Keyhan [Iran’s hard-line newspaper], exposing him, people are so desperate that they just have no other choice,” he told CNN.

So who are the eight candidates Iran’s regime considers suitable to run?

Mohammad Bagher Ghalibaf, 52, is serving his second term as mayor of Tehran.

Milani suggested that many of the younger people — especially in Tehran were looking forward to Ghalibaf’s nomination and possible election — believing in his more progressive thinking as the mayor of Tehran and as a non-cleric.

However, on May 16, an audio file of Ghalibaf surfaced on Iranian websites, apparently linking him to the loyalist Basij militia and IRGC, and describing his direct role as head of the Law Enforcement Forces in the crackdowns of the 2009, 2003 and 1999 reformist protests.

Ghalibaf has dismissed the recording as a malicious smear.

Iran’s semi-official Mehr News has also reported that Ghasem Soleimani, the commander of the (Ghods Force), a division of the Iranian IRGC that conducts special operations outside Iran — is supporting Ghalibaf.

Ali-Akbar Velayati, 68, is a former foreign minister and current senior adviser on international and diplomatic affairs to the Supreme Leader.

A conservative, Velayati received a medical degree from the University of Tehran before specializing in paediatrics at John Hopkins University in 1974.

In media interviews since his nomination, Velayati has focused on Iran’s economic problems and sanctions, and his plans to resolve relations with the international community through diplomacy and connections from his days as a foreign minister.[Source:http://velayati.ir/fa/news ]

Gholam-Ali Haddad-Adel, 68, is a conservative and former speaker of the parliament.

His daughter is married to Ayatollah Khamenei’s son.

Haddad-Adel completed a doctorate in philosophy at the University of Tehran in 1975 and holds a master’s degree in physics from the same university.

He has published many books on philosophy and religion, and is a member of the Academy of Persian Language and Literature and the High Council of Cultural Revolution. In the early 90s Haddad-Adel also served as the vice minister of education.

Ghalibaf, Velayati and Haddad-Adel have formed a three-man pact they call the “2+1 coalition;” whereby two of them will eventually leave the race and join the other in support of his presidency.

Jalili holds a political science degree from Imam Sadegh University and is the youngest of the nominees.

He also appears to have the support of Ayatollah Khamenei although he has denied any favoritism by the Supreme Leader.

“When you have strategies based upon archaic foreign policies of resistance, you get a situation where their barometer that their foreign policy is correct is whether or not Americans are upset.” Ansari also says Jalili has strong support in the Islamic Revolutionary Guard.

Mohsen Rezaei, 59, is another conservative nominee and former IRGC commander and current secretary of the Expediency Council, which mediates between Iran’s parliament and the non-elected Guardian Council.

The Iran Review website quoted Rezaei as saying in a television interview that his primary election mission is the renovation of Iran’s industries and development of its agriculture sector. On the nuclear issue, it quoted him as saying: “The Americans have imposed sanctions on us, while withholding us the time we need. As a result, I will take negotiations quite seriously and I will assign a very powerful team of experts consisting of the most seasoned Iranian diplomats to this mission and, God willing, we will resolve the country’s nuclear issue in this way.”

It is the third time that Rezaei has run for president. In 2005, he withdrew days before the election and in 2009 he came third in the race.

Mohammad-Reza Aref, 62, is a reformist and was Iran’s vice president from 2001 to 2005, during Mohammad Khatami’s presidency.

A non-cleric, he is also a member of the Expediency Council and has a close relationship with Rafsanjani and Khatami.

Aref obtained a master’s degree in 1976 and doctorate in electrical engineering, in 1980, both from Stanford University, before returning to Iran.

Aref is publicly recognized as a strong reformist who has criticized how the nuclear issue has transformed into a political matter and has hit a “dead-end”.

In an interview with Iran’s PressTV, Aref suggested that he aimed to resolve the nuclear issue through strong collaboration with European countries.

He previously served as minister of technology and has taught at the University of Tehran and Sharif University.

Hassan Rouhani, 65, is a senior cleric, member of the Expediency Council and also of the Assembly of Experts, which is responsible for appointing or removing the Supreme Leader.

Rouhani was secretary of the Supreme National Security Council for 16 years and chief nuclear negotiator from 2003 to 2005 — during the presidency of Mohammad Khatami.

He holds a law degree from the University of Tehran and a masters and PhD from Glasgow Caledonian University in Scotland.

Milani says Rouhani is a strong moderate who has worked with all sides and avoided extremism in his views. The politician has publicly announced his support for Khatami and Rafsanjani, he says.

In a book about his experience as Iran’s nuclear negotiator during Khatami’s presidency, Rouhani criticizes Ayatollah Khamenei, says Milani.

“If you read in between the lines, he places a lot of blame on Khamenei. He says in is his book, that if it was up to him, he and his team would have come up with a solution that would not lead up to Iran’s case being deferred to the U.N.– saying ‘we could have done this, and some people in Iran and some in the West torpedoed it,” Milani told CNN.

The last of the eight is Mohammad-Gharazi, 72, a non-cleric with strong conservative views.

Ansari says Gharazi is known to be a marginalized character, characterized by many as “the odd ball” of this process.

Gharazi served in the 1980s as minister of petroleum in the cabinet of former Prime Minister Mir-Hossein Mousavi and as minister of post, telegraph and telephone, in Rafsanjani’s cabinet. But in the recent years he has not played any significant political role.

Gharazi is not known to be part of any particular faction, however has strongly criticized the West and the United States in their strong approach toward Iran and its nuclear issues.

Gharazi has a master’s degree in electrical engineering from Tehran University.

Iran’s regime has always quoted Khomeini as saying “the vote is the yardstick of the Islamic system of government’s popularity.” So, the elections are very important for it.

But despite the huge economic, geopolitical and international implications at stake, Ansari suggests there is no genuine political process guiding the poll and that it’s a mistake to conflate unpredictability with democracy.

“These two have nothing to do with each other. Unpredictability is just the modus operandi of the autocrat, he wants things to be unstable, things to be volatile, because it gives him an opportunity to divide and rule.”

The latest poll carried by the semi-official Fars News Agencypredicted an election turnout of around 70%.

But Ansari predicts a 40% turnout. “None of them have the credibility. The idea of changing this system through an electoral cycle I think for many is impossible; and the only way they can do that is to keep people on the side lines… people who are not remotely interested.”

People whose fates — Milani suggests — are being determined by “a group of 12 old men, almost all over 70, who are telling this vibrant society — where 60% of the educated class are women — what to choose and who to pick as their future leader.”