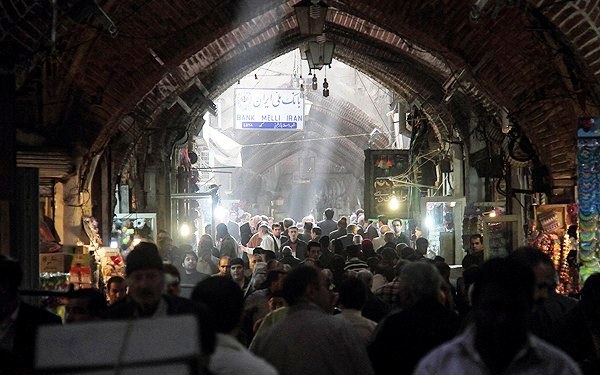 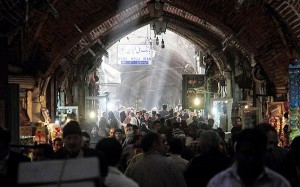 With this month’s presidential election less than two weeks away, the windows of the ironware shops in Tehran’s Grand Bazaar should be pasted thickly with campaign posters.

Instead, however, many of the shop windows are featuring simple A4 sheets of paper with typed announcements of their closure or sale, testimony to a quiet revolt now under way by the city’s influential bazaaris, the shopkeepers and small business owners who have long formed the core of its business community.

The immediate reason for the revolt is a move by the government of Mahmoud Ahmadi-Nejad to increase taxes on the bazaaris as part of an attempt to plug the gap left by Iran’s falling oil revenues. The government increased taxes by 30 per cent last Iranian year and it has unveiled plans to raise them by another 38 per cent this year.

The result, the bazaaris say, is that it now makes more sense to shut up shop than continue doing business and anticipate a visit from the tax man.

“We closed our shop just before the [Iranian] new year [in late March] so that the tax auditor could confirm in his report that we no longer run this business and hence we are not subject to tax,” says Hossein, a 32-year-old ironware merchant who runs a family business in the bazaar. He complains he now has to pay more tax than he earns in revenues each year.

The answer, he says, is to work from home. “These days you can rely on your mobile phone like street dealers who pay no taxes for buying and selling dollars. But if I sit in my shop, then I have to pay tax.”

The concerns are not limited to Tehran’s bazaar. Akbar Shamshiri, head of the Ironware Merchants Union in the central city of Isfahan, says the metal trade there has stalled as local projects are put on hold.

There are also broader concerns about the parlous state of Iran’s economy. The official inflation rate is 32.2 per cent and the country has seen the value of its currency, the rial, tumble over the past year.

Ayatollah Ali Khamenei, Iran’s supreme leader, on Tuesday urged the next Iranian president to prioritise dealing with the country’s economic woes and called on the eight candidates running in the June 14 election to make some “fundamental promises”.

The candidates should “promise, in addition to running the country’s affairs, to pay due attention to the economy which has turned into a scene of imposed challenge with aliens [western powers]”, he told a ceremony on the anniversary of the death of Ayatollah Ruhollah Khomeini.

Tehran’s bazaar does not wield the same power it had when it was a leading backer of the 1979 Islamic revolution. But the emergence of modern shopping centres and the Revolutionary Guard as a business force have not diluted its economic and political weight entirely.

The ironware shopkeepers have long been one of the leading power centres in the bazaar, along with gold merchants, jewellers and fabric traders, all of whom have occasionally resorted to strikes in previous years to protest against the imposition of value added tax.

The government has stood firm in the face of the protests, threatening to confiscate the shops of those who go on strike. So the bazaaris have resorted to a new tactic: shutting down altogether.

In one part of the bazaar in the Tehran neighbourhood of Pamenar, shopkeepers said only 30 of the 117 shops were still open. In another hub, near Cyrus crossroad, just 20 out of 140 shops are operating.

A janitor who works for one cluster of shops says he has not been paid for four months. “There was a time when this centre was so crowded that you were unable to walk around, but now it is like a ghost town,” he says.

The tax rises have been the result of Iran’s changing realities. Iranian governments have usually enjoyed easy income from oil sales and adopted a relaxed attitude toward tax collection.

But the combination of US financial sanctions and an EU ban on Iranian oil imports has caused the government to put more focus on collecting taxes.

In the bazaar, the dispute over taxes has overshadowed the impending election. Frustrated merchants in the old bazaar seem to spend more time talking about their bad cheques rather than the eight candidates’ economic plans.

Many complain that the country’s rulers have already decided who would be the next president and bemoan the barring of Akbar Hashemi Rafsanjani, a market-friendly former president, from the election.

“If Rafsanjani had come, I would have covered my shop with his campaign posters,” says Ebrahim, a jeweller.