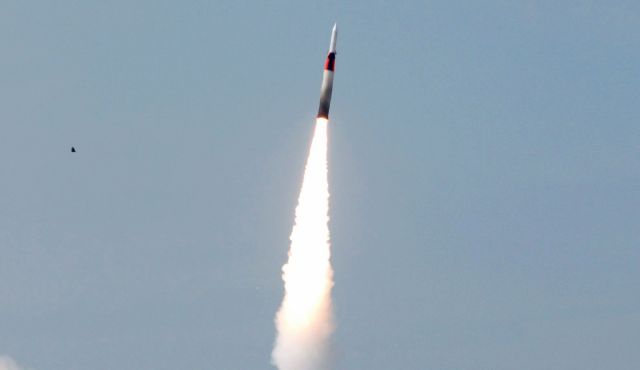 An Arrow missile is launched during a test from an undisclosed location in Israel April 7, 2009.

Defense journal report shows plans to install four underground missile launchers at IAF’s Tel Shahar base between Jerusalem and Ashdod; Israel has never officially revealed location of this base.

Concerned about nuclear threats from Iran, Israel is trying to expedite development of the Arrow III missile to make sure it is prepared for any eventuality, an Israel Defense Forces officer involved in anti-missile defense system development told a security conference on Monday.

“We want to reach a situation in which Israel has a ready defense for any threat, present or future,” said Col. Aviram Hasson, head of the high-level systems department in the Defense Ministry’s Homa Administration, which is responsible for developing anti-missile systems.

He was speaking at a conference on “Aerial Threats in the Modern Era,” sponsored by the Institute for National Security Studies at Tel Aviv University.

The Arrow III is capable of intercepting missiles outside the atmosphere, at a range of up to 2,500 kilometers, and will maneuver to chase after the target missile. The system is aimed at defending against missiles bearing warheads of mass destruction in general, and in particular, those in Iran’s stockpile.

In February Israel conducted its first test of the Arrow III’s capabilities in space. The Arrow III’s interceptor missile, called Reshef, is smaller than that of the Arrow II, the air force’s current system, and this is a significant improvement over its currently deployed predecessor. The missile, which is still in development, is fired out of the atmosphere, where it performs various maneuvers and chases after the target – a long-range enemy missile. It broadcasts continuously to the ground systems throughout its operation.

According to Hasson, if the previous Arrow versions had interception capabilities within a certain range, the Arrow III’s capability has been considerably broadened.

“It enables the interception of threats that are very far away, and essentially widens the range of operation,” Hasson said.

The interceptor missile can be fired from the launch systems the IDF already has, which lowers the cost of the system considerably. Defense officials say that the moment the Reshef missiles become operational, in an estimated three years, there will be no need to manufacture anything else that’s new. All that will be needed is to make adjustments to the computer program that operates the Arrow system.

Jane’s Defence Weekly magazine recently published a story showing how official U.S. publications reveal plans to construct a secret Israel missile base designated for the Arrow III. According to the story, this is part of an Israel Air Force plan to expand an existing facility in Tel Shahar, between Jerusalem and Ashdod, whose location has never been officially revealed.

The estimated cost of this expansion is $25 million. The report detailed the construction plans: Four underground missile launchers, each carrying six interceptors (Reshef model). The report said this information means that Israel can potentially launch 24 Arrow III interceptors against a barrage of ballistic missiles.

The report on a construction tender documents published by the U.S. government details the the type of building that will be built in Israel, which includes highly durable concrete structures, blast doors and steel screens. A system to handle high pressure levels will also be built inside the structures, enabling the electrical components to be protected. According to the documents, the companies responsible for building the basis will have to complete the work within 485 days of the moment they receive the go ahead to begin.