Geneva talks not to yield results without Iran: Russian official 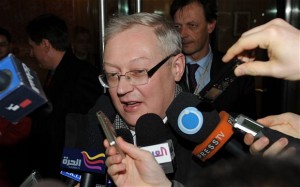 A high-ranking Russian official says the forthcoming international conference in Geneva to seek an end to the Syrian crisis will not succeed to bear fruit in the absence of Iran.

Russian Deputy Foreign Minister Sergei Ryabkov said on Monday that Moscow and Washington are still divided over Tehran’s participation in the conference slated for June.

Nevertheless, the Russian Foreign Ministry believes that the event would not be successful if Iran were not invited, he pointed out.

On May 28, Russian Foreign Minister Sergei Lavrov stressed the necessity of Iran’s presence in the upcoming Geneva talks.

“The issue of Iran is key for us. Iran, without question, is one of the most important nations,” he said.

Russia and the United States agreed in Moscow on May 7 to convene an international conference on Syria, which will serve as a follow-up to an earlier Geneva meeting held in June 2012.

On May 26, Syrian Foreign Minister Walid al-Muallem said that his country agrees “in principle” to attend US-Russia-backed conference.

Speaking at a joint news conference in Baghdad with his Iraqi counterpart Hoshyar Zebari, he said, “I informed the Iraqi prime minister of Syria’s decision that the government agreed in principle to send an official delegation to the Geneva peace conference that will take place in June.”

He stated that the Damascus government believes that the so-called Geneva 2 conference is a “good opportunity for a political solution for the crisis”.

“From the beginning of the crisis, I assured that Syria believes that dialogue among the Syrians is the only solution to Syria and that no one can make a decision on behalf of the Syria people when it comes to the future of their country,” Muallem pointed out.

Syria’s main Western-backed opposition group announced on May 30 that it will not take part in the upcoming Geneva conference.

The so-called Syrian National Coalition (SNC), in comments delivered by its president George Sabra, claimed that the talks have no meaning in light of the ongoing bloodshed that the coalition blames on the Syrian government.

The Syrian government says the West and its regional allies including Qatar, Saudi Arabia, and Turkey are supporting the militants fighting in Syria.