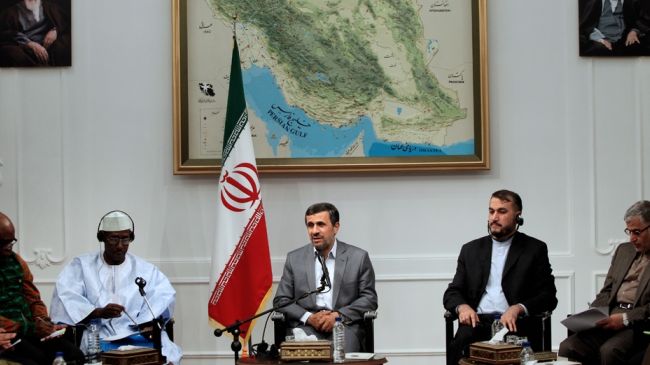 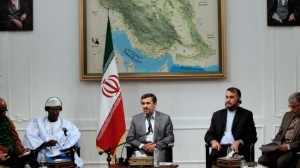 Iranian President Mahmoud Ahmadinejad (C) met with a group of African ambassadors in Tehran on June 1, 2013.

At a Saturday meeting with the ambassadors of African countries in Tehran, Ahmadinejad noted that the hegemonic powers seek to put other nations under pressure under the pretext of countering terrorism, drug trafficking and environmental pollution.

“The system ruling over the world is basically unjust and the UN, the [UN] Security Council and the world’s monetary structure should be altered and reformed based on justice and the interests of the nations,” he added.

Ahmadinejad pointed to Iran and Africa’s strategic wealth and their geopolitical importance, adding, “I believe, if we all stay together, we can change the oppressive system prevailing the world with unity, concord and coordination and that requires collective and inclusive participation.”

“The culture of African people is peace-seeking, piety, honesty, and humanity, but the colonizers and the enemies of nations impose civil and regional wars on the African people in an attempt to plunder their resources and wealth,” The Iranian chief executive said.

He expressed optimism that the African Union and other international organizations would adopt measures and plans aimed at reforming the world order.

Ahmadinejad said that Iran’s friendship with African nations is based on cultural, historical, and humane grounds and stated that the bond will never lose momentum.

Before Ahmadinejad’s remarks, the Malian ambassador, as the representative of the African envoys, underlined the importance of promotion of ties between Iran and Africa, saying, “Africa seeks to enhance and promote cooperation with Iran and we hope that the ties will expand in the near future.”