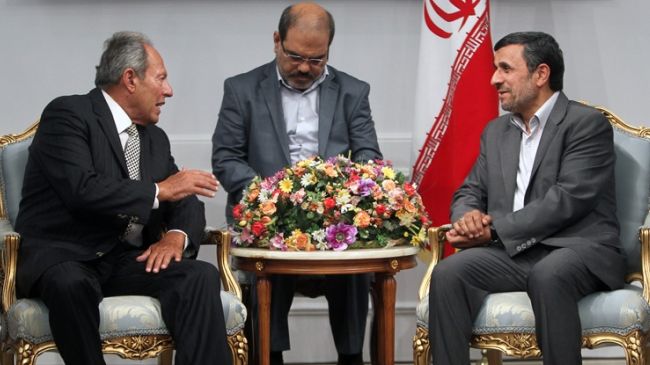 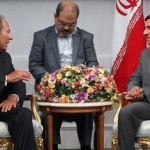 Iran’s President Mahmoud Ahmadinejad says hegemonic powers are trying in vain to spread their domination to the entire world.

“Arrogant powers seek to bring all countries and the region under their dominance, but they will undoubtedly fail due to the vigilance of nations,” Ahmadinejad said in a Wednesday meeting with former Lebanese President Emile Lahoud.

He said any nation that rises up for justice will emerge victorious, adding that the Iranian nation will proudly stand by the Lebanese people.

Lahoud, for his part, pointed to the good rapport between Iran and Lebanon, adding Tehran-Beirut relations are strong as they are based on friendship not interests.

He also praised Iran’s unflinching support for the Lebanese nation, saying the Islamic Republic has stood by Beirut in hard times.

On the same day, Lahoud held a separate meeting with Iran’s Majlis Speaker Ali Larijani, during which the top Iranian official warned that extremism could engulf the entire region if the Syria unrest goes on.

“The current situation in Syria has a strategic impact on the situation in the region, and if stability and peace are not restored in the country, there will be a risk of the extremism bomb blowing up in the whole region,” Larijani said.

The claim by certain countries that arming terrorists and killing the Syrian people could establish democracy in Syria is “ludicrous and unrealistic,” said the Iranian Majlis speaker, adding that the Syrian government should be given the chance to implement political and economic reforms.

He also said that the unrest in Syria was created to break the resistance front against Israel’s outrageous policies.

Lahoud, for his part, said that Iran is a friend of Lebanon and praised Tehran’s political and moral support for Beirut.

“The Israeli regime seeks to stoke insecurity and instability in the entire region, particularly in Syria and Lebanon, in a bid to undermine resistance,” said Lahoud.

Turmoil has gripped Syria since March 2011, and many people, including large numbers of Syrian army and security forces, have been killed in the unrest.

May 30, 2013
20-percent enrichment of uranium by Iran for civilian purposes: Jalili
Qalibaf to return stability to Iran economy within two years