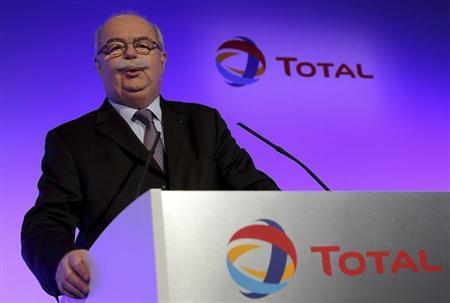 (Reuters) – The colorful boss of Total (TOTF.PA) is unlikely to be felled by demands he stand trial over alleged bribes to Iran as Christophe de Margerie enters a crucial phase of his high-stakes turnaround plan for the oil firm, with no clear successors.

De Margerie, nicknamed “Big Moustache” inside the company which appointed him chief executive six years ago, is deep into an exploration plan to drill more wells in difficult-to-reach African and North Sea frontiers in order that Total meet future output goals – and investors want him to stay and make it work.

“They’re much more concerned in terms of what the company can do in terms of production, capital expenditures, cashflow,” said Iain Reid, an analyst with Jefferies in London and best-rated analyst for Total on Thomson Reuters StarMine.

“(The cases) have been a wrinkle obviously, but all oil companies have legacy legal issues somewhere around the world.”

The Iran case came to a head on Wednesday when Total agreed to pay $398 million to settle U.S. criminal and civil allegations that it paid bribes to win oil and gas contracts to Iran. Now a French prosecutor is recommending de Margerie himself go to trial.

But the oil industry has been plagued by corruption accusations for decades and one fund manager who owns Total shares said it was no exception: “This sort of thing seems to be commonplace in the oil industry. I have heard no discussion in the investor community about (de Margerie) stepping down.”

Instead, investors are more concerned about how close de Margerie is to fixing Total’s undervalued share price.

Total regularly missed its oil and gas production targets in the past but analysts say de Margerie is now setting more realistic aims. The big one now is the company’s 2017 output capacity goal of about 3 million barrels of oil equivalent a day.

“Total used to be worse than peers setting pretty ambitious targets and then failing to meet them. To de Margerie’s credit, in the last three years or so, the targets are more realistic,” said Iain Pyle, analyst at Bernstein in London.

“The new strategy is starting to pay off. It’s something that takes a long period of time. When you increase investment in high-risk high-return exploration, you don’t expect returns from it for a while, it could be 10 years,” Pyle said.

De Margerie, a graduate of a regular French business school, cuts an unusual figure in a company dominated by alumni from elite French colleges and has sought to take the company away from a conservative investment culture.

Industry insiders and some of de Margerie’s supporters say the Total boss’s larger-than-life personality – and his address book – would be very hard to replace.

He counts among business acquaintances both Myanmar’s Aung San Suu Kyi, who sought his advice in attracting investment to the country, and Russia’s Vladimir Putin who retained Total in the huge Shtokman gas project in the Arctic at a time when other Western companies like BP (BP.L) were being shown the door.

“He’s the only big guy out there. I don’t know and was never told about who could be next,” said a source at Gazprom, partner with Total in a number of projects, including the controversial South Pars field in Iran, to which the bribery case is related.

Another fund manager at a UK-based company invested in Total said it had attempted to raise the succession issue with the company because it currently lacked clarity.

“We wanted them to communicate to investors very clearly how the board is thinking about de Margerie’s succession. Not because we feel he should retire at this stage but just because as part of a good governance procedure we would like to have some visibility into board planning around this issue.”

Philippe Boisseau, head of Total’s new energy division and Patrick Pouyanne, who was tasked with the sensitive mission of reducing the group’s exposure to unprofitable European refining sectors, are seen as credible long-term possibilities.

But both are seen to lack vital contacts at a time when Western oil majors are increasingly threatened by rivals from emerging markets such as China and Russia.

“With all the changes in the oil world, nobody could replace him today,” said a close adviser to de Margerie. “There must be only about seven or eight leaders in the world with an address book like his and none at Total. His successors are not ready.”