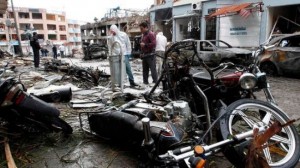 Syria has rejected Turkey’s allegations about its involvement in two car bomb attacks in the Turkish border town of Reyhanli on May 11, 2013.

Iran deputy foreign minister for Arab and African affairs has reaffirmed the Islamic Republic’s support for a democratic solution to the ongoing crisis in Syria.

“Iran supports the Syrian nation, government and that part of the opposition that believes in a political solution; a solution based on democratic approaches and holding of elections in which the Syrian people would decide for the future of their country,” said Hossein Amir-Abdollahian at a Tuesday meeting with the visiting French Foreign Ministry’s Director General for North Africa and Middle East Jean-François Girault in Tehran.

“France is expected to move in this direction and prevent crisis, violence and extremism from spreading to regional and international levels,” he added.

Girault is leading a diplomatic delegation in his visit to Tehran to discuss bilateral relations and regional developments, particularly Syria crisis, with the Iranian officials.

The meeting came a day after the European Union foreign ministers agreed, after lengthy talks among divided ministers in Brussels, to lift arms embargo on militants in Syria.

Iran has repeatedly expressed its opposition to any foreign intervention in Syria’s internal affairs, stressing that inclusive dialogue and national reconciliation as well as free elections are key to settlement of the unrest in the Arab country.

Khaji pointed to Iran’s prominent position in the region and the country’s efforts to promote regional and international peace and stability, noting that Tehran seeks to enhance its cooperation and interaction with the European countries based on its own diplomatic principles.

Girault, for his part, highlighted the importance of Iran’s influential role in the regional developments and stressed the need for the continuation of bilateral talks between Iran and France.