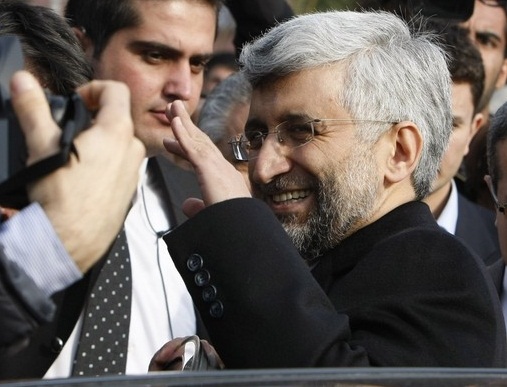 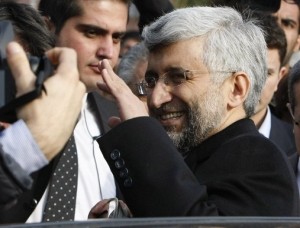 The chief security official is emerging as a frontrunner but, like the other candidates, appears unable to offer a solution to the nuclear issue, regional tensions and a crippled economy

Some in Tehran now regard Saeed Jalili, Iran’s chief security official and lead negotiator in nuclear negotiations with world powers, as the frontrunner in the country’s presidential election.

The 47 year old is one of eight candidates approved for the ballot on 14 June, of whom five are “principle-ists” proclaiming diehard loyalty to Ayatollah Ali Khamenei, the supreme leader.

But neither Jalili nor any other candidate has so far offered much in the election other than banalities – despite Iran’s mounting problems, which now centre on the reduction of oil exports from 2.2m barrels a day to 1.1m in the past year due to tightening western sanctions.

And when it comes to backing the beleaguered Syrian regime in an increasingly sectarian civil war threatening to spread regionally, many candidates are just promising more of the same.

One principle-ist, former parliamentary speaker Gholam-Ali Haddad-Adel, recently told Die Welt, the German newspaper, that Iran needed “more national manufacturing, and a change in people’s lifestyle”. On the nuclear issue and regional tensions, he said western powers were “angry with an Iran that makes its own decisions”.

On becoming Iran’s lead negotiator in 2007, Jalili, whose PhD thesis was on “the foreign policy of the prophet Muhammad”, surprised western diplomats with his hectoring style. Jalili said on state television on Saturday that Iran’s “executive and bureaucratic systems must be designed in ways that enable making the best use of our hardware and software potential”, adding that threats – including sanctions – could be turned into opportunities.

In a recent interview with the US-based Christian Science Monitor, Jalili said the US was hopeless because of the way the Iranian nation was defending its rights. “Today they are witnessing Iran’s eye-catching progress, thanks to [Iranian] resistance.”

In the face of 13% unemployment and 32% inflation, candidates have been slow to advance specific ideas for improving economic growth the IMF projects at -1.3% for 2013, or to explain how they might finance productive investment with lower oil sales cutting government revenue in the financial year ending in March from a budgeted $117bn (£77bn) to $77bn.

Some informed observers hold a theory that a “safe”, if banal candidate, close to Ayatollah Khamenei might be well-placed to reach agreement with world powers over the nuclear question because there would be a more unified approach in the country’s leadership and less danger of faction-fighting.

Ramin Jahanbegloo, the Iranian philosopher exiled in Canada, has just argued this: “It is difficult to imagine that Iran can withstand the sanctions it is facing, which are breaking the backbone of the country’s economy, for much longer,” he wrote in the Indian Express. “In case [Ali-Akbar] Velayati [an adviser to Ayatollah Khamenei] or Haddad-Adel becomes president, a solution to US-Iran relations might be easier to achieve than would have been the case under a contentious presidency of [Esfandiar Rahim] Mashaei [an ally of outgoing President Mahmoud Ahmadinejad] or a reformist candidate who theoretically would not have been an underling of Ayatollah Khamenei.”

Among three candidates left in the election who might offer a more reforming presidency is Hassan Rowhani, a pragmatic conservative who led the Iranian team during talks with the European Union between 2003 and 2005, when Iran suspended uranium enrichment.

At that time, Iran came closer to a substantive agreement on the nuclear programme than at any time since the 1979 revolution, but Rowhani was undermined by domestic critics who accused him of sacrificing the country’s interests.

This is less likely to happen with a president such as Jalili, said Sir Richard Dalton, Britain’s ambassador to Iran 2002-2006. “The unified leadership argument is a good one. But there will still be a threat of being outflanked on the right”.

Dalton pointed to another problem. “I don’t think the team that one might envisage over the next two years will be as good at diplomacy as Khatami’s team, although that is speculation. They are not short of clever people, but they are short of senior people experienced in the clumsy or with the wily ways of foreigners as their range of foreign high-level contacts has narrowed.”

One reformist-inclined analyst in Tehran said Iran’s leaders were increasingly living in a bubble, and that he could see no strategy emerging for dealing with the international and regional challenges, principally US diplomatic pressure and its military buildup: “I fear the Iranian military apparatus is far more intent in maintaining its economic, political and repressive hold on Iran than it is in stopping this war of attrition, of which they are the ultimate target.”

Nor could the analyst see any strategy emerging from either Ayatollah Khamenei or one of his favoured presidential candidates for dealing with Shia-Sunni regional tensions and the risk that the growing escalation of an increasingly sectarian war in Syria would spread to Iraq and Lebanon: “For all the unquestioned and unquestionable powers of the leader, he is looking daily more like a man more interested in his personal powers than the priorities of his nation.”