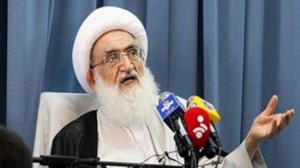 Ayatollah Nouri-Hamedani said on Sunday that everyone, including the elite, is duty-bound to participate in the presidential poll as well as in the city and village council elections.

The senior religious figure further stated that a massive participation of people in the votes could play a major role in strengthening the Islamic Republic’s foundations, creating yet another political epic as advised by Leader of the Islamic Revolution Ayatollah Seyyed Ali Khamenei.

Iranians go to the polls in the nation’s 11th presidential election on June 14. The 4th city and rural council elections are also scheduled to be held concurrent with the country’s presidential race.

On Tuesday, the Iranian Interior Ministry announced the list of candidates approved by the Guardian Council to run in the country’s presidential election.