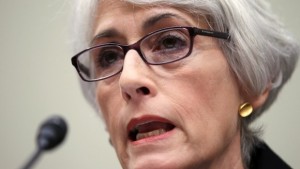 NEW DELHI (AP) — A senior American official on Friday praised India for reducing oil imports from Iran and said the U.S. government will decide soon on New Delhi’s request to renew a waiver from sanctions on Tehran.

U.S. Under Secretary for Political Affairs Wendy Sherman said that India’s reduction of oil imports was supporting U.S. and European Union sanctions against Iran, which are aimed at deterring the country from developing nuclear weapons.

India slashed imports of Iranian crude by nearly 27 percent in the financial year that ended March 31, according to the Press Trust of India news agency.

However, India is reliant on imported crude and is reluctant to completely stop imports from Iran. India’s waiver from the sanctions runs out next month.

“I think that India has really made a tremendous progress in reducing the level of its importation of Iranian oil,” Sherman told reporters. “All of the data is certainly in a positive direction.”

She also said India had stood with the international community in telling Iran that that it should not acquire nuclear weapons. Iran insists its nuclear program is for peaceful purposes

Sherman was in New Delhi to prepare for U.S. Secretary of State John Kerry’s visit to India next month.

She said that Indian Prime Minister Manmohan Singh was expected to visit Washington in the near future.

Energy-starved India imports around 75 percent of its oil to power its economic growth.

India’s junior minister for petroleum, Panabakka Lakshmi, told Parliament in March that Saudi Arabia was India’s main supplier of crude oil, followed by Iraq, Venezuela, Kuwait, the United Arab Emirates and Nigeria. Iran was seventh, down from its earlier position as India’s third-largest supplier of crude oil in 2011.