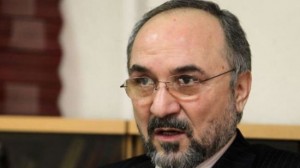 The Iranian ambassador to the United Nations has dismissed claims about Iran’s military presence in Syria and the shipment of arms by the Islamic Republic to the Arab country.

“Despite the unfounded allegations, no Iranian military forces or advisors are present in Syria, but, unfortunately, certain regional countries are interfering in Syria’s internal affairs and fanning the flame of the conflict in the country by sending arms to extremist and terrorist groups,” Mohammad Khazaei said.

He stressed that Iran welcomes any measure aimed at finding a peaceful solution to the unrest in Syria and noted that Tehran will host a third meeting with the same objective in the coming days.

The Friends of Syria Conference will be held in the Iranian capital under the banner of “Political Solution, Regional Stability” on May 29. Iran had held two other meetings on the crisis in the Arab country in November and August 2012.

Khazaei emphasized that the involvement of other countries in the issue of Syria at regional and international scenes should be aimed at supporting a peaceful solution to the ongoing crisis by the Syrian people, and should also prevent the interference of other states in the country’s internal affairs.

He reiterated that the political future of Syrian President Bashar al-Assad should be determined only through holding elections in the country.

He also strongly condemned Israel’s recent airstrike on a research center in Syria, stressing that it was a blatant violation of the international law and UN regulations.

On May 5, Syria said the Israeli regime had carried out an air attack targeting a research center in a suburb of Damascus, following heavy losses inflicted upon al-Qaeda-affiliated groups by the Syrian army. According to Syrian media reports, the strike hit the Jamraya Research Center. The Jamraya facility had been targeted in another Israeli airstrike in January.

The May 5 Israeli aggression was Tel Aviv’s second raid on Syria in three days.

It was reasonably expected of the Security Council and other UN bodies to roundly condemn the Israeli regime’s air raid on Syria, the Iranian ambassador said.

Turmoil has gripped Syria for over two years now, and many people, including large numbers of Syrian soldiers and security personnel, have been killed in the foreign-sponsored militancy.

Quoted, Syria crisis May 25, 2013
US continues campaign against Iran presidential election
Jostling for position in last lap at Cannes