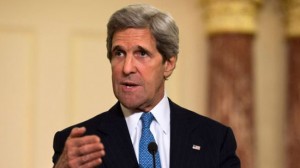 NEW DELHI: India may get yet another US waiver for oil imports from Iran, as Washington and New Delhi get ready for the annual strategic dialogue here next month. John Kerry will make his first visit to India since assuming office as the US Secretary of State to take up the dialogue at a time when the Indo-US relationship is on a low-energy trajectory.

Wendy Sherman, under-secretary for political affairs in US State Department, told journalists after meeting foreign minister Salman Khurshid, “They have stood side-by-side with all of us in the international community to say that Iran should not acquire a nuclear weapon. We greatly appreciate all of the leadership that India has provided, including their enforcement of sanctions. That decision will be made shortly. And all of the data is certainly pointing in a positive direction.”

Foreign secretary Ranjan Mathai confirmed he had discussed the Kerry visit with Sherman. PM Manmohan Singh is also expected to visit the US later this year, possibly during September when he travels to the UN General Assembly.

Speaking about bilateral relations, Sherman said, “We have been working at all levels throughout both of our governments on a number of projects dealing with global economics, global strategic security, energy, climate change, people-to-people regional cooperation. It is really extraordinary, the depth and breadth of the relationship.” She said Indian government had asked for further access to Lashkar-e-Taiba operative David Headley, and the plea would be routed through their homeland security department.

Questioned about Afghan President Hamid Karzai’s request for military assistance from India, Sherman said, “India is a crucial and key player in the future security and development of Afghanistan…India has also been a leader in the new Silk Road and the Heart of Asia process. And anything that happens in this region of the world is going to be positive when India is engaged.”