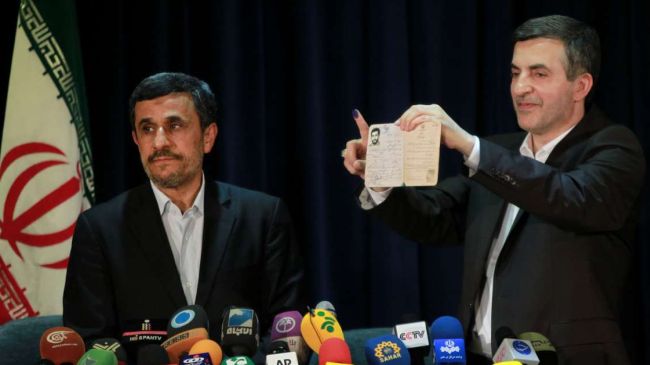 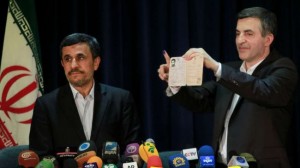 Esfandiyar Rahim-Mashaei (R), accompanied by Iranian President Mahmoud Ahmadinejad, attends a press conference after registering for the presidential election in Tehran on May 11, 2013.

The election campaign office of Esfandiyar Rahim-Mashaei, who was not approved by Iran’s Guardian Council to run in the upcoming presidential election, says it will pursue the matter through legal channels.

In a statement issued late on Tuesday, the campaign office said that it will use “the full legal capacity of the country” to appeal to the Guardian Council to revise and eliminate possible ambiguities in its decision, IRNA reported.

The statement also asked that “President Mahmoud Ahmadinejad, as the executor of the Constitution, take action to remove probable restrictions in this regard.”

In addition, it called on the supporters of Rahim-Mashaei, who is a top aide of President Ahmadinejad, to organize their activities based on legal methods in order to dishearten the enemies of the Islamic Revolution and the Iranian nation.

Earlier on Tuesday night, the Interior Ministry issued a statement saying that the Guardian Council had approved eight presidential candidates.

A total of 686 individuals registered from May 7 to 11 for the Islamic Republic’s 11th presidential election, which will be held on June 14.