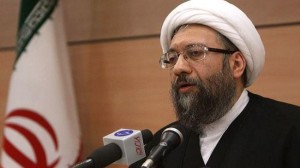 Iran Judiciary Chief Ayatollah Sadeq Amoli Larijani has called on unsuccessful presidential hopefuls and those approved to stand in the race to respect the law and the Constitution in the wake of next month’s vote.

He said on Wednesday that the decisions by the Guardian Council – a 12-member body consisting of six jurists and six theologians – were made in the right direction to create yet another epic election on June 14.

Amoli Larijani further noted that the top constitutional supervisory body has the final say in vetting candidates and those who were not approved should abide by the law.

The senior Iranian official also asked the candidates to refrain from character assassination during presidential debates.

Iran’s Interior Ministry on Wednesday published the list of hopefuls approved to run in the country’s 11th presidential election.

The eight candidates were approved by the Guardian Council after a 10-day vetting process.