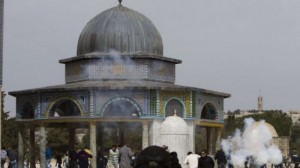 An Iranian lawmaker says the Islamic resistance monitors all the Israeli regime’s measures, and will give a crushing response to its hostile moves in an appropriate time.

Tel Aviv seeks to Juadize al-Quds (Jerusalem) and other Islamic sites in the occupied lands, but the Islamic resistance is watching all Tel Aviv’s actions with the purpose of defending al-Aqsa mosque against repeated aggressions of the Israeli settlers, Mojtaba Rahmandoust said in an interview with the Islamic Consultative Assembly News Agency (ICANA) on Sunday.

“The Zionist regime has not been able to ruin the Islamic identity of the occupied lands, or weaken the Islamic resistance, its main enemy,” The Iranian MP stated.

On May 8, Israeli forces clashed with Palestinians outside the al-Aqsa Mosque in East al-Quds, and arrested dozens of Palestinian youths after the Israeli settlers entered the mosque, and started acting in a provocative way.