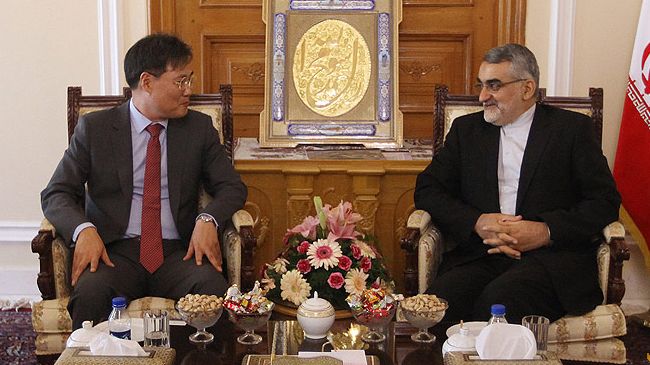 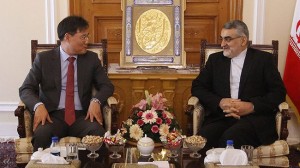 Chairman of the Majlis National Security and Foreign Policy Committee Alaeddin Boroujerdi (R) and a member of Foreign Affairs and Unification Committee of South Korea’s Parliament Chung Moon-hun meet in Tehran on May 20, 2013.

A senior Iranian lawmaker says all signatories to the Non-Proliferation Treaty (NPT) have the right to peaceful nuclear know-how, expressing Iran’s strong opposition to nuclear weapons.

“Iran seriously opposes nuclear bombs and believes that all nuclear weapons in the world should be eliminated,” Chairman of the Majlis National Security and Foreign Policy Committee Alaeddin Boroujerdi said.

He made the remarks in a meeting with a member of Foreign Affairs and Unification Committee of South Korea’s Parliament Chung Moon-hun in Tehran on Monday.

He added that Western firms have lost economic and trade opportunities following the imposition of unilateral sanctions against Iran over its nuclear energy program.

“Sanctions imposed by the West have prepared a good opportunity to increase the level of Iran’s trade and economic relations with other Asian countries,” Boroujerdi pointed out.

Tehran rejects the allegation over its nuclear energy activities, maintaining that as a committed signatory to the NPT and a member of the International Atomic Energy Agency, it has the right to use nuclear technology for peaceful purposes.

The Iranian legislator further pointed to political and economic relations between Iran and South Korea as two important countries in East and West Asia and stated that the two sides have no limitation in strengthening ties.

The South Korean lawmaker, for his part, voiced his country’s determination to expand ties with Iran.

He added that Tehran and Seoul should use their capacities in industry and modern technology to serve the two nations.