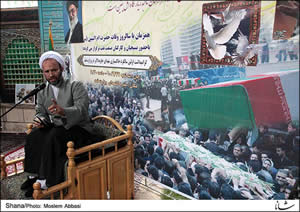 Spotlight on Iran – “Circles of the righteous”: a vehicle for the Basij to potentially influence the presidential election campaign

“Circles of the righteous”: a vehicle for the Basij to potentially influence the presidential election campaign

Hojjat-ol-Eslam Mohammad Reza Toyserkani, the Supreme Leader’s representative to the Basij, announced earlier this week that, if the Revolutionary Guards and the Basij want to intervene in the coming elections for the president of Iran, they will be able to do so through the “circles of the righteous” (حلقههای صالحین), study groups for ideological and religious training run by the Basij.

Referring to Supreme Leader Ali Khamenei’s announcement that the current Iranian year will be the “year of political and economic enthusiasm”, Toyserkani said that the Basij plays an important role in generating political enthusiasm, and that anyone who cares about the values of the founder of the Islamic revolution and the revolution martyrs needs to give some thought to this role and to its fulfillment.

In a speech delivered at a conference of circle of the righteous training team leaders in the city of Hamadan, Toyserkani stressed that the Revolutionary Guards and the Basij have no intention of intervening in the coming elections, and that political enthusiasm is only generated when the people feel that the elections are free and that they are not forced by anyone to vote for any particular candidate. He added that the Basij and the Revolutionary Guards are a sword for the regime, not for the political factions, and that they will respect anyone elected by the Iranians.

The Supreme Leader’s representative to the Basij addressed the possibility of text messages being sent out on the day of the elections to announce the Supreme Leader’s alleged support for a specific candidate, even though Khamenei himself stated that no one will know who he is voting for. Toyserkani rejected the claims according to which the Revolutionary Guards and the Basij support a particular candidate, saying that, if they wanted to act (that is, intervene in the elections), they would use the circles of the righteous for that purpose. In his speech, Toyserkani criticized president Ahmadinejad and his avowed support for Rahim Masha’i. He also expressed reservations about the president’s threats to expose incriminating details about his political rivals, saying that Ahmadinejad had already made similar threats during the previous presidential election campaign in 2009 (http://www.mehrnews.com/detail/News/2053430).

Toyserkani’s remarks come on the heels of a statement he made several weeks ago that eliminating the involvement of the Basij in the election is tantamount to treason. Speaking at a conference of Basij members in Tehran, the Supreme Leader’s representative to the Basij said that the organization needs to function as an axis in the creation of political enthusiasm ahead of the elections, and that its activists are determined to play an influential part in the political arena. Iran’s domestic and foreign enemies, who would like to see the Basij neutralized and prevented from fulfilling its political mission, are committing an act of treason against the founder of the Islamic revolution and its current leader. “We are Basij members and we proudly say that we support principle-ism [osulgara’i, a term used to refer to the political view affiliated with the radical right],” Toyserkani said. He did, however, make a distinction between “principle-ism” and “principlists” (osulgarayan), saying that “principle-ism” means faith in and commitment to Islam, the constitution, the values of Imam Khomeini, the martyrs of the revolution, and the rule of the jurisprudent (http://isna.ir/fa/news/92011703879).

“Program of the righteous” (طرح صالحين) is aimed to further the political and religious indoctrination of Basij members. It is applied since June 2008 in 5,000 Basij bases. The program’s goals are to improve the quality of the Basij members’ ideological training, bring them under broader oversight, and improve the way the Basij contends with the challenges of the “soft war” which, in the regime’s view, is being waged by the West against Iran.

Unlike other training programs operated by the Basij, the “program of the righteous” is based on the study methods commonly used in Iran’s religious seminaries. Students taking part in the program form circles that consist of 15 to 20 students who hold discussions under the guidance of a top Basij member or cleric, who serve as mentors. The mentor’s role is to encourage the students to take an active part in the discussions and bring up questions on religious, ideological, and political issues. While in the program, the students are closely monitored by the mentors. In addition to attending the seminars, which usually take place two nights per week in a mosque that serves as a Basij base, the students are required to take part in various group activities, such as visiting martyrs’ families, going to cemeteries, and camping. The close relationship between the mentor and his students continues outside the Basij base, the mentor being required to instruct his students and keep a close watch on every aspect of their daily lives. The seminars themselves include analyzing political and social issues, discussing moral, political, and ideological questions, reading books on religious and ideological issues, and studying Islamic culture and the Quran.[1]

Following the riots that broke out after the 2009 presidential elections, the program was expanded as part of efforts made by the regime to train forces loyal to the Supreme Leader and to the concept of rule of the jurisprudent. In the spring of 2010, Mohammad-Reza Naqdi, chief of the Basij, announced that anyone who took part in the program, participated in at least three hours of ideological training, and worked in the Basij for at least twelve hours a month, would be considered an “active member” of the Basij (http://www.roozonline.com/persian/news/newsitem/article/-ac5fc6d13a.html). Being an active member brings various benefits, such as priority admission to universities and easier access to government jobs, various discounts, legal support, and concessions in military service.

In November 2012 Naqdi announced that there were 200 thousand learner circles operating in mosques across the country. He noted that the program participants were students of various ages who took part in training activities, which included in-depth study of Islamic religious law, activities to help those in need, participation in Friday prayers, meetings with martyrs’ families, as well as sports and leisure (http://www.mashreghnews.ir/fa/news/170412).

There has also been an increase in virtual training activities conducted under the program. Basij members created dozens of websites and blogs that include religious content, information on Basij activities and “Basij culture”, statements made by the Supreme Leader, information on the martyrs of the revolution, and content on the Western campaign against Iran.

The circles of the righteous currently constitute an extensive infrastructure that may be used by the Basij and the Revolutionary Guards to deepen their political involvement among the public ahead of the elections and mobilize support for certain candidates affiliated with the conservative right. Even now, gatherings that take place as part of the program are being used by Revolutionary Guards and Basij leaders to send political messages. Speaking at a conference attended by program mentors on April 25, Revolutionary Guards Chief Mohammad-Ali Ja’fari spoke about the coming elections and said that the presence of the Basij in the elections is influential. He stressed that the elections in Iran are free, and that the number of candidates for president should not be limited to just one or two (http://www.farsnews.com/newstext.php?nn=13920205000387).

While the Iranian constitution prohibits the armed forces from becoming involved in political issues, the political involvement of the Revolutionary Guards and the Basij has greatly increased in the past several years and reached its peak in the last presidential and Majles election campaigns. On the eve of the 2009 Iranian presidential elections, the chief of the Revolutionary Guards stated that the Basij was not involved in military activity, which is why it had the right to engage in political issues having to do with the revolution.