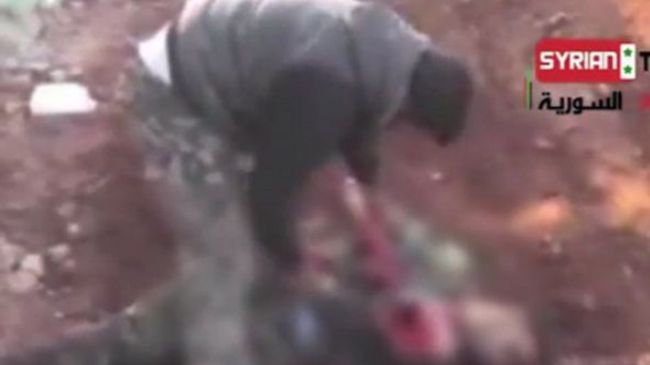 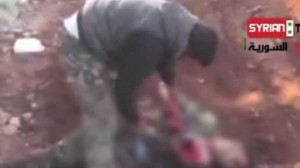 An image taken from a video posted online on Sunday showing a foreign-backed militant in Syria cutting out some of the organs of a Syrian soldier.

In the wake of the publication of gruesome videos showing the atrocities committed by foreign-backed militants in Syria, an Iranian lawmaker says the terrorists’ crimes “reveal the identity of their masters.”

“It seems that the countries beating the hollow drums of human rights have turned a blind eye to the crimes of those who enjoy their support, so that the finger of blame would not be pointed at themselves,” said Seyyed Baqer Hosseini, who sits on the National Security and Foreign Policy Committee of Iran’s Majlis.

“The fire that was started in Syria more than two years ago can only be fueled through fomenting divisions between Shias and Sunnis, and those who support the overthrow of [Syrian President] Bashar al-Assad are well aware of that; therefore, they are trying to provoke terrorists whose identity and religion are not known to fan the flames of anti-Assad fire,” he added.

A video posted online on Sunday showed a foreign-backed militant in Syria cutting out some of the organs of a Syrian soldier and biting into one. In an interview with the Timemagazine conducted later via Skype on Tuesday, Khalid al Hamad, known by his nom de guerre Abu Sakkar, confirmed the authenticity of the video.

Human Rights Watch, which also validated the video, said that the act constituted a war crime.

The film was just one of the many video clips that have emerged over the past two years showing the brutality of the foreign-backed militants in Syria.