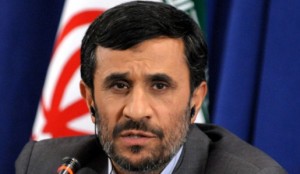 BANGKOK — Iran’s firebrand President Mahmoud Ahmadinejad will address a forum on water security in Thailand next week, an embassy official said on Friday, just weeks before he stands down from the post.

His scheduled appearance in the northern Thai city of Chiang Mai from Sunday comes as Iran gears up for elections and as world powers press the Islamic republic over its suspected nuclear program and support for the Syrian regime.

Ahmadinejad, who is constitutionally barred from seeking a third straight term in next month’s polls, is set to join regional leaders at the Asia-Pacific Water Summit, which will focus on water security and climate change.

“He will arrive on Sunday (May 19) in Chiang Mai,” an Iranian embassy official in Bangkok told AFP, requesting anonymity.

Ahmadinejad — who has irked the West since taking office in 2005 with his defiance of nuclear inspectors, fierce criticism of the US and Israel and tough response to opposition protests — is set to address the summit on Monday.

Ahmadinejad has endorsed his controversial aide and ex-chief of staff Esfandiar Rahim Mashaei.

Nuclear talks between Iran and the UN atomic agency failed to reach a breakthrough yet again Wednesday, as the top US diplomat in separate six-party negotiations warned Washington’s patience was wearing thin.

Iran has also come under pressure over the conflict tearing apart its close-ally Syria and has repeatedly rejected calls for foreign intervention in the increasingly brutal war.

Mahmoud Ahmadinejad, Quoted, Thai 'water summit' May 17, 2013
Why the U.S., Russia, and Iran can all agree to wrestle
Iran’s nuclear negotiator will ‘resist’ west if elected president