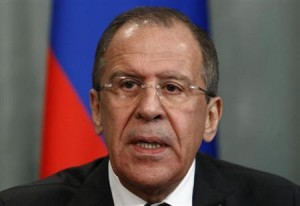 (Reuters) – Russian Foreign Minister Sergei Lavrov said Iran must take part in a proposed international conference to end Syria’s civil war, but that Western states wanted to limit the participants and possibly predetermine the outcome of the talks.

“Among some of our Western colleagues, there is a desire to narrow the circle of external participants and begin the process from a very small group of countries in a framework which, in essence, would predetermine the negotiating teams, agenda, and maybe even the outcome of talks,” Lavrov said in an interview posted on the Foreign Ministry website on Thursday.

Russia has been Syrian President Bashar al-Assad’s most powerful ally during the conflict. Moscow agreed last week with the United States to try to organize an international conference similar to one that was held last year, but this time with representatives of the government and opposition attending.

Iran has welcomed the proposal and has voiced hope to be part of the process. Its wish to participate in a June 2012 meeting on Syria hosted by the United Nations in Geneva was a bone of contention between Washington and Moscow.

“One must not exclude a country like Iran from this process because of geopolitical preferences. It is a very important external player. But there is no agreement on this yet,” Lavrov said in the interview given to a Lebanese television station.

The United States is loath to see Iran, a strong supporter of Assad, being at any such talks. No venue has been confirmed but U.S. Secretary of State John Kerry has talked of a “Geneva Two” meeting.