Reformist Kavakebian mulls dropping out in favor of Hashemi 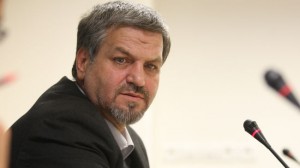 Iranian reformist hopeful Mostafa Kavakebian says it will soon be known whether he will withdraw from the presidential race in favor of former President Akbar Hashemi Rafsanjani.

Kavakebian said the central committee of the reformist Democracy Party will decide on the issue in a couple of days.

There has been growing speculation about the possibility of pro-reform hopefuls dropping their presidential bid in favor of Hashemi Rafsanjani, who currently chairs Iran’s Expediency Council.

Kavakebian added that creating jobs tops his economic agenda and that the country’s unemployment can be resolved through a four-year plan.

The president of Iran is elected for a four-year term in a national election. The registration for the country’s 11th presidential election ended on May 11, with 686 individuals having signed up for the race, which is scheduled for June 14.

The hopefuls will be vetted by the Guardian Council, which is a 12-member body consisting of six jurists and six theologians. The supervisory body is also tasked with confirming the election results.

Under Iran’s election law, the Guardian Council is required to announce the list of approved candidates within five days after the end of registration. This period can be extended for another five days if necessary.