Qalibaf questions Rafsanjani’s performance during past terms in office 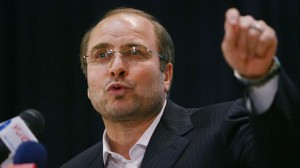 Qalibaf brought into question the social and cultural achievements of the Rafsanjani administration ‘despite enjoying the full support of Leader of Iran’s Islamic Revolution Ayatollah Seyyed Ali Khamenei during his presidency.’

Rafsanjani’s return to power, Qalibaf said, would mean the whole country would suffer four years of tensions and polarization, and it would mean that impoverished people would get poorer.

Taking back the country to 20 years ago would be the biggest cruelty to people, the Tehran Mayor stated.

A total of 686 individuals signed up for the race during the registration period, which began on Tuesday March 7 at Iran’s Interior Ministry and ended on Saturday March 11.