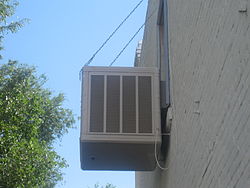 TEHRAN, May 15 (MNA) – A Saudi Salafist cleric has prohibited women from turning the ventilation system on in the absence of husbands.

Mehr News quoted Al-Alam report saying that one of Saudi Salafist-Wahhabist clerics, who usually have a distorted reading of Islam, has issued ludicrous decrees, incompatible with common sense, in recent years banning different social and religious groups in Saudi Arabia.

In one of such decrees, a Salafist cleric, who introduces himself on his Twitter page as Abul Ala, issued a decree saying that “turning on the cooler ventilator is prohibited for women in the absence of their husbands,” justifying it as “ the woman’s act is very dangerous, and may bring about immorality in the society.”

“When she turns the cooler on, someone may notice her presence home, and this might bring about immorality,” reads Twitter page of the Salafist cleric.

Quoted, Saudi Salafist Abul Ala, using cooler for women in absence of husbands May 15, 2013
Game-changers in Syria will lead to Israel-Iran confrontation
U.S. targets two UAE firms for dealing with blacklisted Iran banks