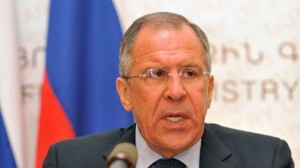 Russia says Iran plays a key role in resolving the crisis in Syria, underlining the need for the participation of the Islamic Republic in an upcoming international conference on Syria in Geneva.

“While Moscow calls for [the] participation of more members including Syria neighboring countries, Iran and Saudi Arabia in the second round of talks [in Geneva], Washington is trying to decrease the number of these participating countries and replace them with those countries who are supporting the militant groups in Syria,” Russian Foreign Minister Sergei Lavrov said in an interview with Al-Mayadeen TV on Monday.

At a joint press conference in Moscow on May 7, the Russian foreign minister and US Secretary of State John Kerry agreed to encourage the Syrian government and the foreign-backed militants to find a political solution to the crisis.

Moscow and Washington agreed to hold an “international peace conference” on Syria, which will serve as a follow-up to an earlier Geneva meeting, which was held in June 2012.

Commenting on the agreement between Moscow and Washington over the conference, Lavrov said that nothing would be changed in this regard, but there were some differences among parties over the details of the international peace conference.

The Russian foreign minister also condemned the move by the Arab League to hand Syria’s seat to the foreign-backed opposition, saying the decision was a “big obstacle for achieving peace in Syria.”

The unrest in Syria began in March 2011; many people, including large numbers of Syrian soldiers and security personnel, have been killed in the violence. The Syrian government says that the chaos in the country is being orchestrated from outside.