Iran hopes P5+1 will give positive response to proposals: Araqchi 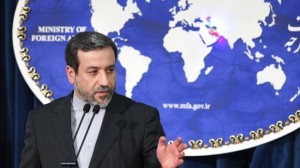 Iran’s Foreign Ministry spokesman says the Islamic Republic hopes that the P5+1 group of powers will give a constructive response to Tehran’s proposals about its nuclear energy program.

Speaking in a press conference on Tuesday, Iranian Foreign Ministry’s newly-appointed Spokesman Abbas Araqchi said, “Iran’s proposals during the second round of the talks in Almaty were very constructive, balanced, and proportionate; and we expect the other side to react positively and favorably.”

He further said that Iran is now expecting a response from EU Foreign Policy chief Catherine Ashton – who represents the P5+1 – and is hoping for a constructive approach toward the proposals of the Islamic Republic.

Secretary of Iran’s Supreme National Security Council (SNSC) Saeed Jalili is due to hold bilateral talks with Ashton on May 15 in the Turkish city of Istanbul. The meeting will be a follow-up to the last round of negotiations held in Almaty.

During the meeting in the Kazakh city of Almaty on April 5-6, Iran presented the P5+1 (Britain, China, France, Russia, and the US plus Germany) with the details of its proposals.

Undersecretary of the SNSC Ali Baqeri said on April 5 that Tehran had offered the group “clear proposals to launch a new round of cooperation” between the two sides.

Araqchi added that any progress in the negotiations requires taking “mutual, balanced, simultaneous and congruent steps.”

Commenting on the recent remarks by US President Barack Obama and UK Premier David Cameron, Araqchi said, “Such remarks about continuing pressure on Iran are discouraging and indicate the lack of a realistic view and the right understanding of reality by those who advocate these pressures.”

During their joint press conference in Washington on Monday, Obama said the two sides had “discussed Iran, where we agreed to keep up the pressure on Tehran for its continued failure to abide by its nuclear obligations.”

Araqchi said the policy of pressure had never been effective, adding that purposeful negotiations made with goodwill were the only way to achieve a solution to the Western standoff over Tehran’s nuclear energy program.

The US, the Israeli regime and some of their allies falsely claim that Iran is pursuing non-civilian objectives in its nuclear energy program, with the US and the European Union using the unfounded claim as a pretext for illegal sanctions on Iran.

Tehran strongly rejects the allegation over its nuclear energy activities, maintaining that as a committed signatory to the Non-Proliferation Treaty (NPT) and a member of the International Atomic Energy Agency (IAEA), it has the right to use nuclear technology for peaceful purposes.

The Iranian Foreign Ministry spokesman further welcomed Egypt’s proposal on forming a quartet on Syria and voiced the Islamic Republic’s readiness to help resolve the crisis in the Arab country.

A high-level meeting of the quartet group was held on September 17, 2012 about a week after preparatory talks in Cairo by lower-ranking officials from the four countries.

Araqchi expressed satisfaction with the fact that different countries have turned to negotiations as the way to settle the Syrian conflict.

“Currently, the inclination toward resolving [Syria’s] crisis through political means and nationwide dialogue between the oppositionists, the Syrian government and influential countries is on the rise,” he said.

The conflict in Syria began in March 2011; many people, including large numbers of Syrian soldiers and security personnel, have been killed in the violence. The Syrian government says that the chaos in the country is being orchestrated from outside.

Cooperation with the IAEA on Bushehr NPP

Commenting on the recent request by the IAEA Director General Yukiya Amano to dispatch a team of experts to Bushehr Nuclear Power Plant (NPP), Araqchi said Iran will cooperate with the IAEA “within the framework of agreements.”

On Saturday, Amano was quoted as telling the Bahrain News Agency in Manama that “it is better to send experts to check on the safety of Iran’s Bushehr reactor,” following an earthquake that struck an area near the NPP.

On April 9, a 6.1-magnitude quake hit the town of Kaki near Iran’s southern city of Bushehr, killing over 35 people and leaving more than 850 injured.

Officials at Russia’s Rosatom State Nuclear Energy Corporation say the power plant has been constructed to withstand an earthquake with a magnitude of nine Richters.

The Bushehr NPP, which is located 18 kilometers south of Bushehr and about 160 kilometers away from the quake-stricken region, remained intact.