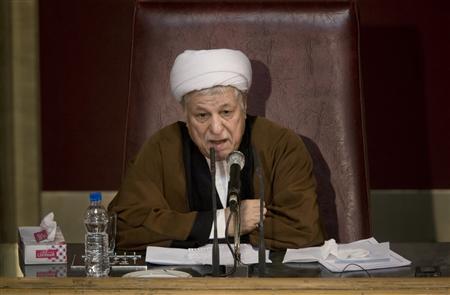 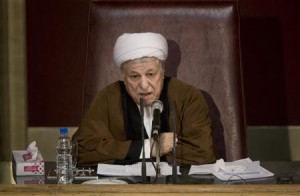 TEHRAN, Iran (AP) — Signs on currency exchange shops in Tehran explained why the doors where temporarily shut: Waiting to see if former President Akbar Hashemi Rafsanjani would seek to reclaim the office. On Sunday, the money changers reopened early amid a mini-surge in Iran’s gasping economy after Rafsanjani joined the race.

That’s how much Rafsanjani’s surprise decision reawakened Iran’s presidential election process, which now includes more than 680 hopefuls and will culminate June 14 with just a handful of names on the ballot to succeed Mahmoud Ahmadinejad.

The common wisdom held that the ruling clerics, which vet all the candidates, would clear only an establishment-friendly slate and pro-reform voters would be kept on the margins after years of withering crackdowns. The decision by another former president, Mohammad Khatami, to stay out of the race appeared to seal the scenario.

Suddenly, though, the 78-year-old elder statesman Rafsanjani has challenged that equation by putting his name in the election mix just minutes before the registration deadline Saturday.

EDITOR’S NOTE: This is the third story in an occasional series examining the June 14 Iranian election and the wider global and internal Iranian consequences at the end of President Mahmoud Ahmadinejad’s era.

He has enough of a liberal aura to re-energize reformers for the first time since being crushed in the wake of Ahmadinejad’s disputed 2009 re-election. He also is seen as a potential steadying hand on Iran’s sanctions-sapped economy as a “millionaire mullah” patriarch of a family-run business empire.

In one of his first statements since joining the race, Rafsanjani spoke in general terms Sunday of seeking a new “economic and political” rebirth in a time of “foreign threats and sanctions.”

Meanwhile, he still holds a senior position inside the ruling theocracy – and unimpeachable credentials during the 1979 Islamic Revolution – that gives him tough armor against likely attempts to sully his reputation as the election moves into its next stage.

The challenge, however, is whether reformists can fully rally behind a leader who left office 16 years ago and has built a reputation as a cunning political survivor that earned him a host of nicknames including Akbar Shah, or Great King. He has criticized crackdowns on dissent, but also retains a top post inside the theocracy and closely follows the official line on issues such as Iran’s nuclear program and regional alliances including Lebanon’s Hezbollah and Syria’s regime.

“Rafsanjani is still the only real candidate who can pull together reformists,” said Hamid Reza Shokouhi, an editor at the pro-reform Mardomsalari newspaper.

There is no guarantee Rafsanjani even will make the final candidate list approved by the ruling clerics next week. But he casts a wide net that cannot be easily ignored.

As Rafsanjani headed to the Interior Ministry to submit his name on Saturday, dozens of supporters lined the streets to shout words of thanks. The numbers might be insignificant. But any kind of public outburst by reformists is certain to be noticed by authorities.

Late Saturday, a group of pro-reform leaders gathered as Khatami called Rafsanjani’s candidacy “a national opportunity” and urged liberals and moderates to unite behind him. Some reformist candidates, including one of Khatami’s former vice presidents, pledged to withdraw to throw his support behind Rafsanjani, who last sought the presidency in 2005 in a loss to Ahmadinejad that has left bad blood that lingers still.

“Khatami has guaranteed reformist support for Rafsanjani,” said Tehran-based political analyst Ali Dowrani. “Reformists are reaching a consensus to back him.”

It’s somewhat of a political bandwagon by default.

With Khatami staying out, there were only longshot candidates for Iranians seeking to ease the hard-line pressures since 2009, including sharp clampdowns on the Internet and political freedoms. The leading opposition candidates from four years ago, Mir Hossein Mousavi and Mahdi Karroubi, remain under house arrest, while establishment enforcers, such as the paramilitary Basij corps, have been given far greater reach.

Rafsanjani’s youngest daughter, Faezeh, was released from jail in March after serving a six-month sentence in connection with the post-election chaos. His middle son, Mahdi, also is to stand trial in coming weeks for his alleged role in the riots.

Rafsanjani, too, has suffered some blows but never enough to sweep him aside.

His main dissent moment came amid the punishing attacks on protesters claiming vote fraud brought Ahmadinejad back to power in 2009. Rafsanjani denounced the violence on both sides, but the comments were perceived as a message to the Revolutionary Guard and ruling clerics.

Rafsanjani, who carries the mid-level cleric rank of hojatoleslam, was forced to resign from his prestigious role as one of the leaders of Friday prayers at Tehran University. He later was pushed out of the Assembly of Experts – the only group with the power to dismiss the supreme leader – after failing to get enough support to leverage possible concessions from Supreme Leader Ayatollah Ali Khamenei on the postelection clampdowns.

Rafsanjani, however, managed to keep his post as head of the Expediency Council, an advisory body that mediates disputes between the parliament and the Guardian Council, the watchdog group that vets all candidates for the presidency and other elections.

“I feel we young people will have an easier situation if Rafsanjani is in office,” said Faezeh Jian, a 23-year-old Tehran resident who was still in elementary school when Rafsanjani left office after eight years in 1997. “I like him. I think we will face fewer crackdowns.”

Such comments hint at Rafsanjani pulling in some support from the now dismantled Green Movement of four years ago. But his strongest appeal could be as a fiscal steward.

Iran’s president has no direct say over nuclear policies – and no way to address international sanctions. But many Iranians complain about Ahmadinejad’s economic policies of subsidies and government handouts. While they have earned Ahmadinejad a loyal following in many impoverished areas, they also are blamed for straining Iran’s economy and contributing to the more than 30 percent plummet in the national currency’s value.

“He (Rafsanjani) is internationally well-known and his economic team is quite powerful,” said Kamyar Yaghouni, a 23-year-old law student.

Much of Rafsanjani’s fiscal mystique is built around a family-owned business empire that began with pistachio trading but grew to include construction companies, an auto assembly plant, vast real estate holdings and a private airline. In 2003, he was listed among Iran’s “millionaire mullahs” by Forbes magazine.

At a Tehran grocery story, owner Abbas Hemmati described Rafsanjani as the least offensive of the presumed front-runners, which include Tehran’s mayor and a senior adviser to Khamenei. Also in the mix is Ahmadinejad’s top aide, but there are questions on whether he will be cleared because of Ahmadinejad’s internal political battles with the ruling clerics.

“Rafsanjani is bad, but I prefer him to others who are worse,” said Hemmati. “When I cannot have a palace, I’ll take a hut at least.”