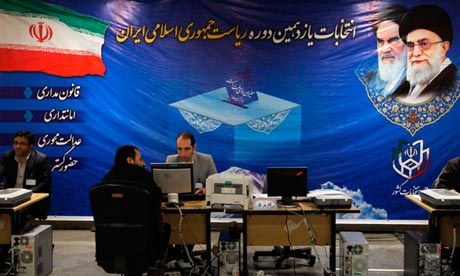 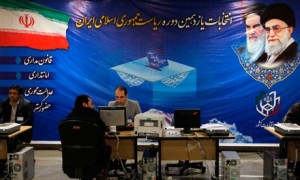 Ayatollah Ali Khamenei, Iran’s supreme leader, gazes down from a giant mural that adorns the wall of the Tehran ministry that has been registering candidates for next month’s presidential election. Slightly above and behind him are the unmistakably baleful features of Ayatollah Ruhollah Khomeini – a reminder that the political system of the Islamic Republic he founded remains as complex and opaque as ever.

Next month millions of Iranians will vote for a replacement for Mahmoud Ahmadinejad, the abrasive populist Khamenei anointed in 2005 and who won a second term four years later in a contest which is widely believed to have been rigged. Mir-Hossein Mousavi, the Green movement leader who claimed victory in 2009, is still under house arrest, his supporters in disarray, in prison or in exile.

Barring the unexpected – a regular feature of Iran’s idiosyncratic elections – no openly opposition figure will be permitted to run on 14 June. But Saturday’s last-minute registration of Hashemi Rafsanjani, a powerful former president and the pragmatic eminence grise of Iranian politics for decades, has dramatically overturned the assumption that this will be a contest only between dyed-in-the-wool conservatives.

It is a complicated business – for Iranians as well as foreigners. “One constant of our elections is the big surprise,” laughs Farah, a middle-aged professional. “Another is the way Iranians appear uninterested but will rush and vote at the last minute.” Even experts are confused. “Many questions remain to be answered,” admitted Sadegh Zibakalam, an astute Tehran University political scientist.

The stakes are certainly high – for the Islamic Republic and perhaps the world. Iran’s nuclear confrontation with the west, international sanctions, a disastrous economic crisis and hopes for domestic change could all be affected by the result. “The battle for the presidency is not just about the executive branch but the future direction of Iran as a whole,” Mohammad Ali Shabani, who edits the Iranian Review of Foreign Affairs, has argued.

Iran’s state media is already praising the exemplary organisation of the polls and predicting a massive turnout – to be trumpeted as proof of a fully functioning democratic system. Yet beneath the officially orchestrated enthusiasm there is a sense of apathy – not least because of the bitter memories of how the protests that erupted after the announcement of Ahmadinejad’s 2009 victory were ruthlessly crushed.

“These elections will be rigged just like the last ones,” predicts Morvarid, an insurance executive, who doesn’t believe that any candidates who are out of ideological step with Khamenei will survive vetting by the jurists of the Guardian Council. Other sceptics say they will vote to avoid punishment but will spoil their ballots.

The counter-argument is that this suddenly exciting election might make a real difference. “If we do not participate then they [the regime] will have the majority and will get on with their agenda,” warns Mohammad, 25. But Parisa, his student girlfriend, counters furiously: “What happened in the last elections proved only one thing and that is that we’re not important. Our friends were beaten, jailed, even raped – for what? Some left the country. Several died or are still unaccounted for. If we vote it means that we condone everything that happened to us and to our friends.” Loyalists say it is their duty to help defend the Islamic revolution.

“It’s deja vu,” says Ali Ansari of St Andrews University. “The last election is casting an enormous shadow over this one. It’s affecting the way everyone is behaving. Sure, the regime needs a bit of theatre to generate interest, but they will stop well short of allowing anything like last time to happen. There is an overwhelming cynicism about the system. People are not going to be duped again.”

Ahmadinejad’s successor will be chosen from a field that includes the Khamenei hyper-loyalist Saeed Jalili, a high-profile nuclear negotiator. Hassan Rowhani, who also handled the nuclear issue, is more centrist. Mohammed Baqer Qalibaf, the mayor of Tehran and a former senior revolutionary guard officer, combines a modernising agenda with a reputation for competent management. Ali Akbar Velayati, a one-time foreign minister, is another strong conservative candidate.

Rafsanjani’s last-minute decision – “the triumph of hope over experience”, quipped one pundit – is intriguing. Now 78, he has a record going back to before the 1979 revolution, and is credited with having persuaded Khomeini to end the ruinous eight-year war with Iraq.

Beaten by Ahmadinejad in 2005, he did not openly back the Greens in 2009 but he did urge the government to address people’s grievances afterwards. Unlike Mohammed Khatami, the reformist president whose 1997-2005 tenure is now bathed in a retrospective golden glow, Rafsanjani has kept channels to Khamenei.

“Iran is always puzzling because it doesn’t lend itself to simplification,” muses Roberto Toscano, Italy’s ambassador to Iran when Ahmadinejad first won. “This time the complexities and contradictions are really wild. The supreme leader wants a subservient and disciplined sidekick but he also need a president to solve some very delicate problems. The supreme leader had a very bad surprise with Ahmadinejad. He thought he would be his altar boy but it turned out that Ahmadinejad wanted to be the priest.”

Khamenei, whose theocratic authority is backed by the Revolutionary Guards, intelligence services, the judiciary and religious endowments, retains control of national security issues including the nuclear file and Syria. He has already warned Iranians not to vote for candidates who advocate a conciliatory approach towards the US. Still, a president with credibility can serve his purposes too.

“This election is necessary to boost the self-confidence of the regime in nuclear talks, in dealings without the outside world and to prove to Iranians that the regime is solid and in control,” says a veteran analyst. “With a big turnout the regime can say: ‘We got out 40 million voters in elections that were held peacefully and with massive support: you have to deal with us; we are here to stay.'”

Repression, intimidation and censorship of opposition journalists mean that there is less talk about issues and more about personalities. But the sorry state of the economy is clearly the main worry. The consensus among experts is that it is in the worst shape it has been since the end of the war with Iraq in 1988.

“It doesn’t matter to me who becomes the president, but by God’s grace, I hope it’s someone who can resolve the nation’s economic problems,” said Hamid Reza, a fortysomething government employee. “I am sick of the stress and worrying about daily price rises and inflation.”

But Morvarid, the insurance executive, insists that it is political change that really matters. “I’m struggling with the economic situation, but I’m not going to buy their rubbish about how much they’re going to fix everything,” she says. “If someone can come and improve the political situation – even without necessarily improving the economy – that person gets my vote over an undemocratic candidate who happens to know the economy.”

Only reformists dare to say openly that bread-and-butter problems are linked inextricably to foreign policy. “Iranians feel that if there can be better relations with the west things will improve economically at home,” argues Mohamed Karoubi, whose father Mehdi ran alongside Mousavi last time – and who also remains under house arrest. “The people are under heavy pressure. They are suffering from a shortage of medicines. Everyone has problems because of the sanctions.”

With a month to go before polling day there is plenty of scope for further drama. Observers say one crucial question is whether Ahmadinejad’s controversial former aide – Esfandiar Rahim-Mashaei, who is loathed by Khamenei and his supporters – will be allowed to run. If he is disqualified some believe that the outgoing president, who remains in office, will turn openly on Khamenei – perhaps by spilling the beans on what really happened in 2009 or by refusing to rig the results again. It is also tantalisingly unclear whether Rafsanjani will be a serious candidate or intends rather to play the role of kingmaker.

“I wonder,” ponders Ansari, “if this is a technocratic/reformist last-ditch attempt to seize back the Islamic republic through the ballot box.”

In any event it would be wrong to dismiss this election as meaningless, as do radical opponents of the regime. Significant changes took place, after all, under both Rafsanjani and Khatami. “Iran is not a democracy but it is not a totally centralised Soviet-style system either,” says a respected Iranian observer who is now in exile. “There is a degree of political debate about the distribution of resources, transparency and administration. This limited debate gives the system sufficient flexibility to correct some of its mistakes. It also sucks all the energy away from the idea of overthrowing the regime.”

Individual choices count, with many still influenced by, and fiercely loyal to, Khomeini’s vision. “Look, the main thing at stake is the protection of the regime from foreign influence,” said Mohammad, an engineer with the paramilitary Basij. “When I vote, my main priority is to help contribute to a strong base of support for the revolution and the supreme leader, and then I vote for whoever I believe is the most fitting candidate.”