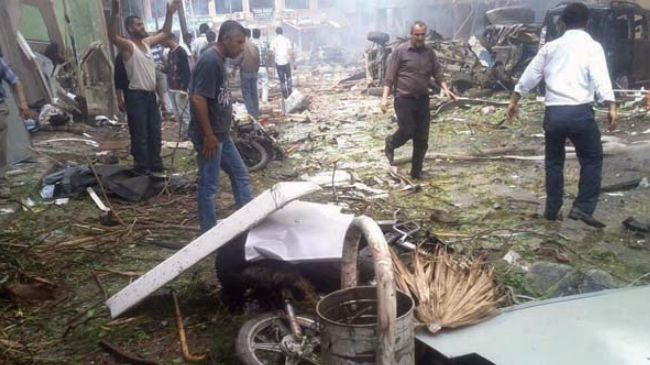 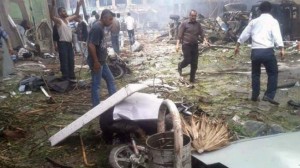 People gather at the site of one of the explosions in Reyhanli on Saturday, March 11, 2013.

Deputy Foreign Minister for Asia and Oceania Seyyed Abbas Araqchi has condemned the recent explosion in a Turkish town near the border with Syria.

“This incident is a brutal terrorist crime and such crimes that target ordinary people are condemned whenever in the world,” Araqchi said on Saturday.

Offering his condolences to the Turkish government and nation, Araqchi said, “Fighting terrorism is the common duty of all countries.”

“We hope that terrorism is uprooted in all countries in the region and the world through cooperation among governments,” the Iranian official added.

Several blasts rocked Reyhanli town in the southern province of Hatay on Saturday as a result of which at least 40 people were killed and more than 100 others injured.

Turkish Interior Minister Muammar Guler said the explosions were were caused by car bombs, adding that two vehicles packed with explosives detonated near the town’s post office and municipality.

Some 29 injured were in critical conditions, Guler also said.

“We are going to launch an inquiry into all this, so that everything becomes clear,” Guler said, adding that the regional governor was sent to Reyhanli to “put the necessary security measures in place.”

In February, 17 people were killed and 30 others injured after a minibus exploded at a crossing on Turkey’s border with Syria near Reyhanli.

The Cilvegozu border post is one of the main crossing points for Syrian refugees into the neighboring country, according to Turkish officials.